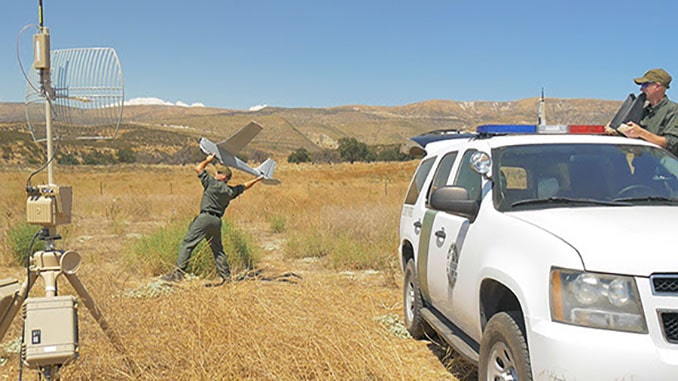 AeroVironment’s Puma 3 AE small unmanned aircraft system is designed for the real-world environment Border Patrol agents operate in.  Easy to transport, deploy and operate, the Puma system can be launched from anywhere, at any time, and requires no additional infrastructure, such as runways or launch devices.  The AeroVironment Puma flies for hours in the most extreme environments while producing high-resolution, continuous or on-demand spot surveillance of critical land and sea border areas at any time of the day or night.  Highly automated and with GPS navigation, the Puma dramatically extends the reach of Border Patrol agents at a fraction of the cost of manned or larger unmanned aircraft.

“Operating on the nation’s front line, U.S. Border Patrol agents deploy the AeroVironment Puma system day or night from a safe distance to scan a border area for activity and then use that information to respond more quickly, more stealthily and with less risk,” said Rick Pedigo, AeroVironment vice president of business development.  “Puma takes on the tougher missions in treacherous and dangerous terrain and keeps border agents out of harm’s way.  Border Patrol agents pack the system on their vehicles, allowing them to gain an eyes-in-the-sky advantage at a moment’s notice.”

The Puma 3 AE systems will also support humanitarian missions, assisting in the location of individuals in need of aid along difficult-to-reach border areas and responding to natural disasters.

The AeroVironment Puma AE is a fully man-portable unmanned aircraft system designed for land and maritime operations. Capable of landing in water or on land, the all-environment Puma, with its Mantis i45 sensor suite, empowers the operator with extended flight time and a level of imaging capability never before available in the small UAS class.

AeroVironment’s unmanned aircraft systems are uniquely professional grade and proven with more than 1 million operating hours, including in extreme environments and combat operations.  As the largest supplier of reconnaissance UAS to the US Department of Defense, AeroVironment offers a family of small and portable UAS that have been protecting soldiers, marines, airmen and special operators in the harshest environments for more than two decades.

The RQ-20A/B Puma™, Puma LE, RQ-11B Raven®, RQ-12A Wasp®, together with VAPOR Helicopter UAS  comprise AeroVironment’s family of tactical Unmanned Aircraft Systems. This Family of Systems provides increased capability to the warfighter that gives ground commanders the option of selecting the appropriate aircraft based on the type of mission to be performed. This increased capability has the potential to provide significant force protection and force multiplication benefits to small tactical units and security personnel. AeroVironment provides logistics services worldwide to ensure a consistently high level of operational readiness. AeroVironment has delivered thousands of new and replacement small unmanned air vehicles to customers within the United States and to more than 45 allied governments.

AeroVironment provide customers with more actionable intelligence so they can proceed with certainty. Based in California, AeroVironment is a global leader in unmanned aircraft systems and tactical missile systems, and serves defense, government, and commercial customers.