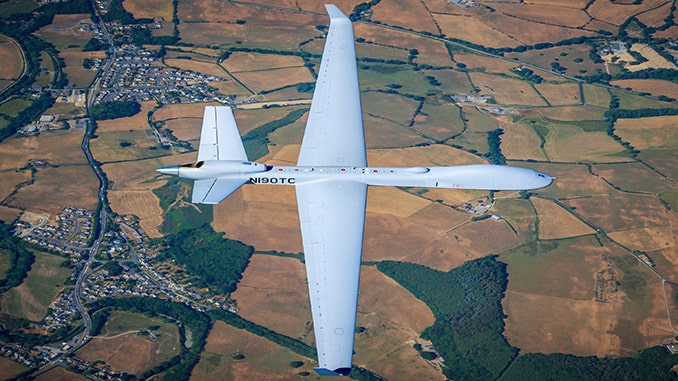 General Atomics Aeronautical Systems, Inc. (GA-ASI) has signed a cooperative agreement with NASA to perform a demonstration flight as part of the agency’s project to integrate Unmanned Aircraft Systems (UAS) into the National Airspace System (NAS). The objective of the demonstration, scheduled for 2020, is to tackle key challenges that prevent routine commercial UAS operations in the NAS today, including development, integration, and certification of UAS and the technologies required for safe operation with other manned and unmanned aircraft traffic in the NAS.

The team completed the Critical Design Review on September 18th. Key enabling technologies that will be demonstrated include Detect and Avoid (DAA) and Command and Control (C2) datalink systems, which are aligned with recently-published RTCA standards.

As part of the demonstration, GA-ASI’s MQ-9B SkyGuardian Remotely Piloted Aircraft (RPA) will exhibit its ability to provide a wide variety of commercial and public services using onboard sensors and additional ‘virtual sensors’ that it could carry in the future. Services include inspections of hundreds of miles of rail, energy pipeline, powerline and canal infrastructure, agriculture monitoring and topological surveys, as well as wildfire and flood monitoring, and maritime surveillance.

The City of San Diego is supporting GA-ASI’s and NASA’s flight objectives under the UAS Integration Pilot Programs (IPPs). The highlight of the flight will be to perform public infrastructure surveys above the city. The City’s UAS IPP team will connect GA-ASI with local customers of the survey opportunities that this portion of the demo will offer.

“NASA and GA-ASI have a shared goal of seeing UAS fly safely and unencumbered in the NAS,” said Linden Blue, CEO, GA-ASI. “GA-ASI has worked with NASA for more than five years on this goal and we’re excited to participate in their next set of demonstrations.”

Flight tests on NASA’s Ikhana, a Predator® B/MQ-9 UAS produced by GA-ASI, served as the basis for verification and validation of the RTCA DO-365 and DO-366 technical standards for DAA, which were published by RTCA in May 2017. This has put GA-ASI on a path toward leading the industry in producing Medium-altitude, Long-endurance (MALE) UAS that are approved to fly in the NAS.

In June 2018, GA-ASI’s DAA system was the key technology that enabled NASA to fly the Ikhana for 2.5 hours through the NAS, taking off from Southern California and flying through multiple airspace classes at various altitudes and requiring communications with several air traffic control centers. The DAA system installed on Ikhana enabled the UAS to meet the intent of the FAA’s 14 CFR 91.113(b) requirement to “see and avoid” other aircraft, allowing a large UAS to fly without a chase plane for the first time in certain classes of airspace.

According to NASA, the agency initiated the Systems Integration and Operationalization (SIO) project that will result in multiple flight demonstrations focusing on different types of UAS and their flight missions. GA-ASI’s demonstrations will conduct commercial missions above 10,000 feet. NASA’s SIO includes two other partnerships demonstrating small/medium sized UAS at lower altitudes.

GA-ASI’s technology partners for the SIO demonstration include Honeywell (supplies the TCAS II for the DAA system), and Collins Aerospace for the Command and Non-Payload Communications (CNPC) datalink radios, which is part of the C2.