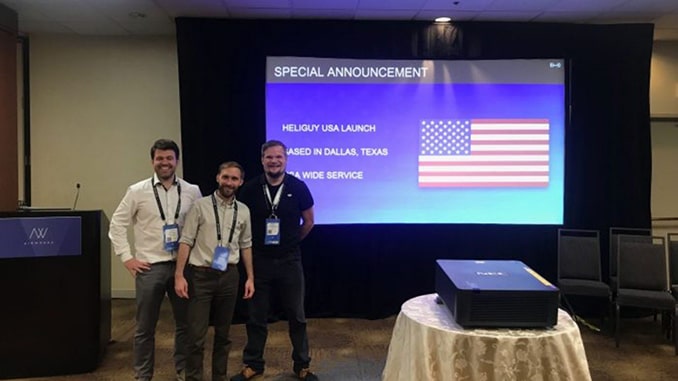 Heliguy Opens Office In Dallas, Texas, As Part Of A Major Expansion Into The USA

Heliguy – one of the world’s leading drone suppliers – has opened in Dallas, Texas, as part of a major expansion into the USA – it was revealed at DJI’s AirWorks conference.

With more than a decade of experience in the UAS industry and having established themselves as one of DJI’s largest and most trusted European enterprise channel partners, Heliguy has decided that the time is right to bring its award-winning model of service and support to America.

This will build on Heliguy’s successful enterprise formula, which has seen the company establish an esteemed list of clients including Balfour Beatty, Terra Drone Europe, Sulzer Schmid, The BBC, National Geographic, Network Rail, London Fire Brigade and Sellafield Sites, as well as forge a worldwide network of partners with key industry players such as SlantRange, 3DR, MicaSense, DroneDeploy, Delair, ParaZero and Hasselblad.

Heliguy will also be bringing its successful consumer brand to the USA, offering DJI’s best hobbyist and professional equipment – from the Mavic range, to the ground-breaking Osmo line of handheld cameras and the educational robot, the RoboMaster S1.

Heliguy started life more than a decade ago and has deep roots in America. Since then, Heliguy has embraced and been at the forefront of the constantly evolving drone industry and has built a formidable reputation from its base in the North East of England.

Opening in America is an exciting next chapter in the Heliguy story and the company is looking forward to connecting the USA and Europe and cross-pollinating skills and expertise.

Customers will be able to take advantage of next-day delivery and the same 50-day returns policy offered in Europe.

The exciting news was revealed during a presentation by Heliguy’s Business Development Manager Ruairi Hardman, who was specially invited by DJI to be one of the expert speakers at this year’s event.

Fittingly, Mr. Hardman’s speech – in partnership with our client Terra Drone Europe – focused on the importance of global cooperation in the drone industry as a driver for success, and how Heliguy is integral to this.

He said: “I am very excited to announce that Heliguy is launching in the USA. Heliguy is committed to providing clients with access to the whole drone ecosystem and to the Heliguy model of support and service. We are open to and welcome any cooperation with anyone who we can assist – both clients and service providers – and look forward to helping them
utilize drone technology to maximize efficiency savings and enhanced safety.”

During the AirWorks conference, Heliguy began to build relationships and talk to some key players in the USA drone industry, including New York City Fire Department, Duke Energy Corporation, and Terra Drone Ventus (the USA division of Terra Drone Corporation).

He said: “This is exciting. Heliguy is crossing boundaries, just like a drone does, and that is what it is all about. “We are an ecosystem across the globe. Heliguy can bring its experiences to America and Heliguy can learn from us. I am excited to say that Heliguy is now part of our family in the USA.”

Meanwhile, Christof Schmid, from Heliguy client Sulzer Schmid, welcomed Heliguy to the USA. He said: “For us, Heliguy proved to be a reliable partner and supplier of DJI equipment when the crunch time was on. Welcome to the USA.”

Awards and Accreditations – What Are Heliguy’s Credentials?

Having started life in 2006 as an RC helicopter specialist, Heliguy shifted its focus into the emerging drone market. Since then, the company has become a leading player in the industry and established itself as a DJI Gold Partner, certifying the company’s expert knowledge and services to enterprise customers.

Earlier this year, Heliguy was honored with a Top 10 Partner of the Year (Europe) award from DJI Enterprise, recognizing its industry-leading approach to servicing the enterprise drone market across a range of industry verticals, which includes looking after more than 40 UK emergency services.

On top of this, Heliguy is a renowned training provider, running industry-leading UK courses such as the Permission for Commercial Operation (PfCO), Continuing Professional Development (CPD), and Emergency Services Drone Operators Training (ES-DOT).

Heliguy is a Civil Aviation Authority-approved NQE and has designed and performed closed training courses for a range of commercial clients including UK police forces and another critical government enterprise. The plan is to expand this training offering into America, helping drone pilots achieve their qualification with the Federal Aviation Administration
(FAA). Heliguy is accredited by the CAA (Civil Aviation Authority), Achilles, CPD (Continuing Professional Development) and Cyber Essentials and is also ISO 9001 rated. Recently, Heliguy was named as a National Winner in the prestigious 2019 European Business Awards – one of the world’s largest business competitions.

Heliguy values the importance of the drone ecosystem and has helped to supply and support an impressive list of enterprise clients. Here are what some of them have had to say about Heliguy:

International infrastructure firm, Balfour Beatty, is using drones to transform its operations. Heliguy has supplied the company with a range of equipment, including the DJI Phantom 4 RTK, for a range of jobs, including a major, multi-million-pound Smart Motorway project in The Midlands, England. Thanks to drones, Balfour Beatty is enhancing safety, increasing efficiency, gathering data faster, improving asset productivity and gaining high-accuracy results.

So why did world-renowned Balfour Beatty turn to Heliguy as its drone provider?

Wayne Hughes, Principal UAS Pilot at Balfour Beatty, said: “Heliguy has industry-recognised expertise and offers a fantastic range of DJI products which have supported us in our business.

“Heliguy offers a good range of support, from the initial query, through the transaction and then advice and technical support after the purchase. I wouldn’t hesitate to recommendHeliguy to others in the industry – communication is easy, the advice is there and they will even ship any rental equipment you require straight to site so you can be up and running without delay.”

Another one of Heliguy’s major enterprise clients is Terra Drone Europe – one of the biggest drone service providers in the world.

Praising Heliguy, Terra Drone Europe’s Technical Director, Patrick Rickbery, said: “We loved dealing with Heliguy’s Business Development staff and we know that Heliguy provides the equipment we need with rapid turnaround time. The team understands our needs and supports us.”

To find out how Heliguy can support, scale or start your enterprise drone program, or to find out about our consumer range, visit www.heliguy.com.

No Replies to "Heliguy Opens Office In Dallas, Texas, As Part Of A Major Expansion Into The USA"