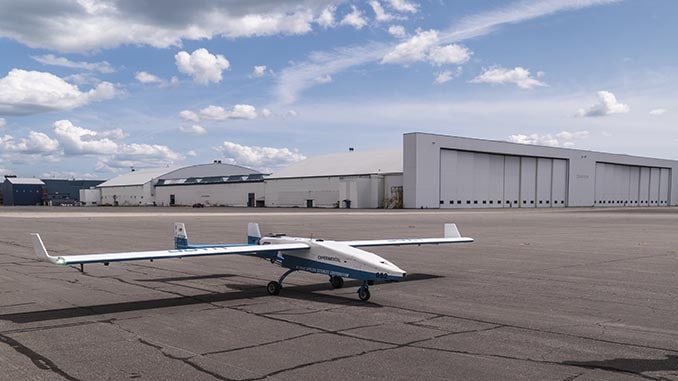 UAV Turbines, Inc., a pioneer of microturbine technology, today announced the inaugural flight of its Monarch 5 engine, a first-of-its-kind microturbine propulsion system, at Griffiss International Airport. This new turboprop technology is engineered to provide mid-sized commercial and military unmanned air vehicles (UAVs) with a reliable, efficient, safe, heavy-fuel propulsion system. The Monarch 5 is now poised to replace the unreliable and maintenance-intensive reciprocating engines currently used by providing operators with superior performance and ease of use, and features a remote start, quiet operation, and long intervals between required maintenance.

According to a recent report from the FAA, the commercial UAV market is expected to triple in size by 2023 as the need and use cases for UAVs expand to include medical support, cargo delivery, search and rescue, and transportation. However, current engines do not offer the reliability and safety profile required to perform these tasks. Now, for the first time, UAV Turbines’ Monarch family of turboprop engines offers a propulsion system that will meet the safety, flight duration and reliability requirements for commercial use.

“After years of innovative and intensive design and engineering work, we are elated to see our first Monarch propulsion system take flight in a TigerShark airframe from Navmar Applied Science Corp.,” said Kirk Warshaw, CEO of UAV Turbines. “This flight is proof positive that our team is without peer in the development of small turboprop engine systems. Our attention now turns to working with commercial and military partners to develop airframes around our Monarch 5 propulsion system, similar to the manner that manned aircraft are designed and developed. Furthermore, we believe our Monarch engine’s capabilities will be instrumental in driving the urban air mobility and defense industries forward in making unmanned aircraft systems (UAS) as commonplace as airplanes, trucks and ships for both commercial and defense use.”

“The capabilities the Monarch engine family brings to the UAV industry are game-changing,” said Major General (retired) William T. “Tim” Crosby, Chairman of UAV Turbines’ Board of Advisors. “The successful test flight of the Monarch propulsion system proves that reliability, added safety, and efficiency is now available to the end-user, whether they be military or commercial, in a variety of platforms. This engine will be instrumental in the continued growth and development of the UAV market.”

In addition to serving as a best-in-class UAV propulsion system, the Monarch 5 and other members of the Monarch family currently in development are ideal for applications such as ground power and auxiliary power when configured as a turbogenerator. Having been designed to the standards required for flight, both the aerospace and ground power markets now have access to a new and disruptive technology.

About UAV Turbines, Inc.
UAV Turbines is creating the world’s first reliable, lightweight and fuel-efficient microturbine engines to provide propulsion and power generation in small to medium-sized UAVs. The company’s Monarch microturbine increases performance beyond what current engine systems permit. Designed by UAV Turbines’ team of world-class engineers and protected by multiple patents, Monarch runs on less-volatile heavy fuels than Avgas and provide abundant onboard electrical power. UAV Turbines’ first-of-its-kind engine is a reliable, quiet, cost-effective option for both the defense and commercial sectors. In 2018, the company entered into a Technical Investment Agreement with the U.S. military for the development of a more efficient propulsion system, the key advancement to the success of future UAVs. Founded in 2014, privately owned UAV Turbines is headquartered in Miami, Florida.