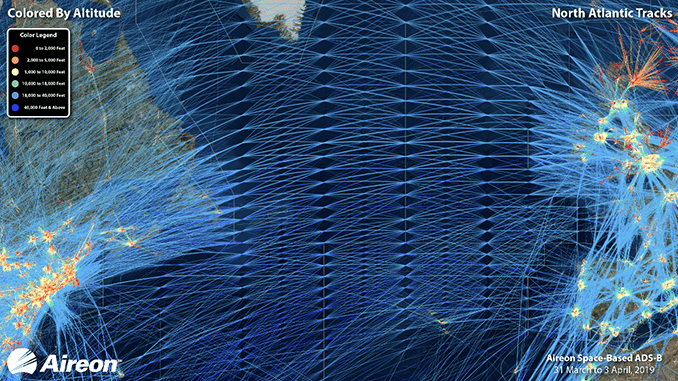 The Air Traffic Control Association (ATCA) has recognized Aireon, NAV CANADA and NATS with their Annual Industry Award for the successful deployment of space-based ADS-B technology over the North Atlantic Ocean.

Marked by the implementation of a completely surveilled North Atlantic—the world’s busiest oceanic airspace, managed by NAV CANADA and NATS—the Aireon system has been in trial use since spring 2019.

The deployment of space-based ADS-B over the North Atlantic empowers air traffic controllers to make air travel more safe, efficient and predictable. Before Aireon, aircraft over the North Atlantic would report their positions every 14 minutes. Now, with real-time data, air traffic controllers are more able to offer the best and most fuel efficient routes, as well as being able to intervene more quickly in the event of a safety event.

Martin Rolfe, NATS CEO said, “To be recognised by ATCA is a sign of the transformational nature of the technology, as well as the professionalism and teamwork demonstrated across NATS, NAV CANADA and Aireon in making the introduction so smooth and successful.

“We’ve only been using the Aireon service for a few months, but it is already delivering real operational benefits for our customers, with more to come as we implement further reductions in separation standards and remove speed and route restrictions in the coming months.”

From 28th March to 31st of August, there were over 2,400 additional North Atlantic flights as compared to 2018. In addition to accommodating higher traffic volumes, the innovative use of Aireon’s new ADS-B service has improved the safety and flight efficiency performance of this airspace with over 4,400 more flights assigned their requested level when compared to 2018, most of whom were previously flying 2,000 or 3,000 feet lower than requested.

“Based on the immediate benefits we’re seeing for NATS and NAV CANADA in the North Atlantic, it is clear that space-based ADS-B it is a powerful tool for innovation,” said Aireon CEO Don Thoma. “Deployment in the North Atlantic has set the standard for how Aireon and our customers operationalize space-based ADS-B, and we look forward to scaling it across the ATM industry.”

ATCA’s Annual Industry Award is a Medallion Award presented to groups for outstanding achievement or contribution adding to the quality, safety, or efficiency of air traffic control. In addition to the immediate increase in safety, the introduction of space-based ADS-B will improve the ability to offer optimal routing and altitudes for airlines in this region. In fact, it is estimated that up to 90% of flights across the North Atlantic Ocean will be able to fly their preferred flight route, compared with the current rate of just 60 percent, and eight out of every ten flights will be eligible to fly without any speed restrictions.

“Few technologies exist today that enact such a positive impact on safety measures, and we are looking forward to an aviation industry where everyone reaps the benefits of space-based ADS-B,” said NAV CANADA President and Chief Executive Officer, Neil Wilson.

Empowered by Aireon’s data, NAV CANADA and NATS air traffic controllers were able to re-route 3,419 fewer flights from their assigned route and 158 fewer flights from changing their speed. Between 15th of April and 31st of August, approximately 43,000 flights, over one third of all eastbound flights of the North Atlantic, were instructed to “Resume Normal Speed” for a total duration of 2.2 million minutes (or c.37,000 flight hours).

“These improvements not only reflect improved customer efficiency, but also provide a corresponding reduction in the risk of altitude deviation or Gross Navigation Error (GNE) from flight crews who may inadvertently follow their flight plan and not their ATC clearance,” explained Wilson.

Between 28th March and 31st of August, NATS received approximately 134 million ADS‐B reports, all arriving within the target eight second update rate, with most as low as 2-3 seconds.

The average time it took for those position reports to reach a controller was just 0.19 seconds against a target of two seconds.

“As the first system deployment of its kind, we are pleased to honor Aireon, NAV CANADA and NATS for the recent deployment of space-based ADS-B technology in the North Atlantic,” remarked Peter F. Dumont, President and CEO of ATCA, who will present the award to the three organizations on October 22, 2019 at the annual ATCA Awards Luncheon. “We congratulate them for their achievement in advancing the science, safety, and efficiency of air traffic control.”

“NATS and NAV CANADA share a long-term vision of a future made possible through innovation in air traffic control. They have the endurance and resources to support the long deployment of Aireon’s system, and together they will help us achieve the next frontier of benefits that spaced-based ADS-B can provide our global air traffic control system,” Thoma said.

About Aireon LLC Aireon has deployed a space-based air traffic surveillance system for Automatic Dependent Surveillance-Broadcast (ADS-B) equipped aircraft throughout the entire globe. Aireon is harnessing next-generation aviation surveillance technologies that were formerly ground-based and, for the first time ever, is extending their reach globally to significantly improve efficiency, enhance safety, reduce emissions and provide cost savings benefits to all stakeholders. Space-based ADS-B surveillance covers oceanic, polar and remote regions, and augments existing ground-based systems that are limited to terrestrial airspace. In partnership with leading ANSPs from around the world, like NAV CANADA, the Irish Aviation Authority (IAA), Enav, NATS and Naviair, as well as Iridium Communications, Aireon is providing a global, real-time, space-based air traffic surveillance system, available to all aviation stakeholders.

About NAV CANADANAV CANADA is a private, not-for-profit company, established in 1996, providing air traffic control, airport advisory services, weather briefings and aeronautical information services for more than 18 million square kilometres of Canadian domestic and international airspace. The Company is internationally recognized for its safety record, and technology innovation. Air traffic management systems developed by NAV CANADA are used by air navigation service providers in countries worldwide.NAV CANADA is a partner of Aireon LLC, an international joint venture deploying a space based Automatic Dependent Surveillance-Broadcast (ADS-B) system that will expand air traffic surveillance to all regions of the globe.

About NATSNATS is a leading air traffic management and solutions company, established in the UK in 1962 and now operating in countries around the world. NATS handled 2.6 million flights in 2018, covering the UK and eastern North Atlantic from its centres at Swanwick, Hampshire and Prestwick, Ayrshire. NATS also provides air traffic services at 13 UK airports; at Gibraltar Airport and, in a joint venture with Ferrovial, at a number of airport towers in Spain.

For more information visit the NATS website at www.nats.aero