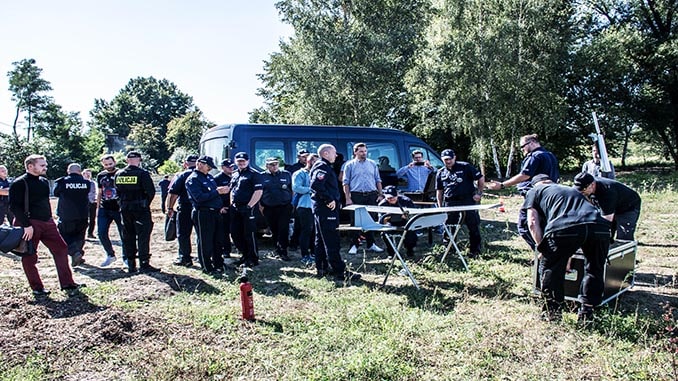 The Department of Special Training of the Police Academy in Katowice, Poland, organised a seminar on: The use of unmanned aerial vehicles (UAV) in the Police and the way police officers deal with UAV operators who violate legal regulations.

This seminar was attended by more officers from the Police Headquarters, Warsaw Police, and others from Provincial Police in Katowice, Kraków, Opole, Gdańsk, Rzeszów, Poznań and Wrocław, and the Management Board of the Central Bureau of Investigation in Katowice, the Polish Air Navigation Services Agency, Scientific and Research Center for Fire Protection (CNBOP), the GZM (Upper Silesian and Zagłębie Metropolis).

Participants were introduced to the methods of using data collected by unmanned aerial vehicles, drone detection and neutralization systems. In a demonstration flight the participants were introduced to the features and capabilities of SKYROBOT FX10 and the scope of using the aircraft for public safety, surveillance, object tracking, monitoring and search missions. The officers observed the functionality of Skyrobot FX10 with its EO/IR camera with auto-tracking, 40x zoom, secure data-link, electric propulsion of +2hrs and Ground Control Station with SkyView GCS NATO/STANAG
compliant software.

The seminar participants were able to personally experience live mission-operations by co-defining tasks during the mission. All appreciated the ease of performing missions using the Robot Aviation Ground Control station equipped with the SkyView software suite.

The participants expressed high interest on the capabilities of SkyRobot FX10 and its compatibility with the current needs for UAS used by Police.

Other police and military organizations have requested demonstrations of capabilities like the one in Poland, which shows the great interest for Skyrobot FX10 and the Skyrobot line of UAS.

About Robot Aviation AS
Robot Aviation is a leading developer of Unmanned Aerial Systems (UAS) for military and commercial applications. Offering a family of SkyRobot™ systems tailored for specific missions to enable faster decision making, increased awareness, and consistent accuracy for our users since 2008. Robot Aviation has offices in Norway, Sweden and Poland.