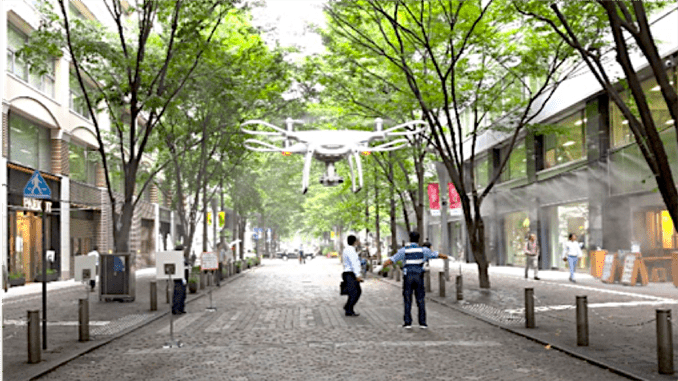 Japan-headquartered Terra Drone Corporation, one of the world’s leading providers of industrial drone solutions, in collaboration with real estate giant Mitsubishi Estate, has successfully conducted a pilot test in the city of Tokyo to showcase how unmanned aerial vehicles (UAVs) or drones can be used in urban environments to aid logistics, security and surveillance, and disaster prevention.

The demonstration was conducted in one of Japan’s leading business centers – the Marunouchi area of Tokyo. Leveraging Terra Drone’s homegrown unmanned traffic management (UTM) system, a drone flew autonomously at an altitude of 2.5 meters, navigating seamlessly between the high-rises of Marunouchi. The UAV captured aerial footage and relayed it back to a control room where analysts monitored the video to detect issues like logistical bottlenecks and security threats.

The test flight was organized as part of the ‘Marunouchi UrbanTech Voyager’ initiative by Mitsubishi Estate. The aim of the UrbanTech Voyager project is to transform the Marunouchi district into a business and innovation hub by utilizing urban-development-friendly artificial intelligence (AI), Internet of Things, and robotics.

In Japan, drone use is active in mountainous areas and remote islands, but full-scale use in urban areas is not expected before 2022. This demonstration was aimed to showcase how a robust UTM system can make it possible to not only avoid collisions but also to realize the efficiency of logistics and security operations in everyday towns.