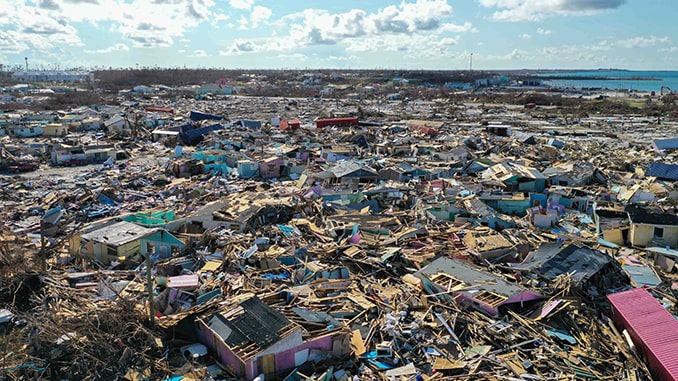 As the death toll continues to climb in the aftermath of Hurricane Dorian’s September 1 landfall on the Abaco Islands in The Bahamas, professional All Hazards and emergency management teams from the private and public sectors have come together to use aerial drones combined with cutting-edge rapid mapping technology to assess damage and offer situational awareness to local Bahamian government officials.

Members of the Airborne International Response Team (AIRT), a Miami-based 501(c) non-profit organization that provides unmanned aircraft system (UAS) capabilities for disaster response, teamed up with members of the Southeast Florida Region 7 All-Hazards Incident Management Team (SEFL-R7 AHIMT), a professional All Hazards disaster and emergency management team based out of Southeast, Florida, to form a joint-reconnaissance team to survey damage across the hardest hit areas of the Grand Bahama and the Abaco Islands in the Northern Bahamas.

Operating out of Palm Beach International airport, the team was able to secure private air transportation to the various islands they visited.  Starting in Nassau, the team witnessed the escalating response to the disaster which included the deployment of some U.S.-based Urban Search and Rescue (USAR) teams aboard U.S. military aircraft, as well as an army of other non-profit groups rushing in to provide much needed assistance.

After coordinating with the Bahamian government, the team proceeded to Freeport where they helped unload essential supplies including a school bus filled with newly arrived cases of water, tarps, and general supplies for the relief effort.  The team then departed to conduct damage assessment operations with aerial drones at the University of the Bahamas – Northern Campus, and nearby neighborhoods which were hit hardest by Dorian’s fury.

“We saw first-hand the damage that this hurricane leveled upon the Bahamas,” said Nigel Baker, Team Coordinator and Incident Commander of SEFL-R7 AHIMT.  “The combination of massive storm surge and fierce Category 5 winds was more than most structures could bare, no matter what code they were built under.”

At its peak, Dorian’s sustained winds were marked at 185 miles-per-hour, gusting up to 220mph, according to the National Hurricane Center in Miami.  The storm surge over some parts of The Bahamas is projected to have been higher than 20-feet, according to local Bahamian officials.

One tool the recon team brought with them was an unmanned aircraft system (UAS) – also known as a “drone.”  These aerial systems manned with high-resolution camera systems are helping to map disaster scenes in new ways never before imaginable.

“The debris field at Marsh Harbor was unlike anything I have ever seen,” according to Christopher Todd, Executive Director, AIRT.  “By combining the drone with the latest rapid mapping technology, we were able to produce a highly accurate and incredibly detailed digital map of the hardest hit areas of Marsh Harbor and other the towns.”

Todd says this type of solution will soon be in use by search and rescue teams around the world when responding to disasters like Dorian.

“Beyond just search and rescue and damage assessment missions, these types of systems will help us provide a better understanding of what exactly happened, why it happened, and how it might be prevented from happening again in the future,” according to Todd.

“This new technology is quickly providing new capabilities for emergency managers,” offers Baker.  “More detailed information coming in quicker than ever before will allow us to make better decisions that will ultimately help save more lives.”

For now, the team will continue to provide requested support to The Bahamas as their capabilities and authority allows.  However, the 2019 hurricane season is not over.  Danger is lurking as more tropical systems taunt the Caribbean and U.S. East Coast.

“We need to remain vigilant and ready to respond to the next big storm,” says Baker.  “We’ll take what we have learned in the Bahamas, continue training, and put this new technology to good use once again when it is most needed.”