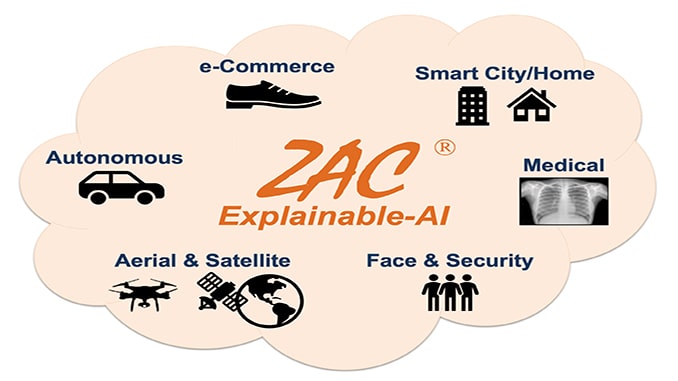 Z Advanced Computing, Inc. (ZAC), a software startup, is funded by the US Air Force, to use ZAC’s detailed 3D image recognition technology, based on Explainable-AI, for drones (unmanned aerial vehicle or UAV) for aerial image/object recognition.  ZAC is the first to demonstrate Explainable-AI, where various attributes and details of 3D (three dimensional) objects can be recognized from any view or angle.  “With our superior approach, complex 3D objects can be recognized from any direction, using only a small number of training samples,” said Dr. Saied Tadayon, CTO of ZAC.  “You cannot do this with the other techniques, such as Deep Convolutional Neural Networks, even with an extremely large number of training samples.  That’s basically hitting the limits of the CNNs,” continued Dr. Bijan Tadayon, CEO of ZAC.  “For complex tasks, such as drone vision, you need ZAC’s superior technology to handle detailed 3D image recognition,” emphasized Dr. Saied Tadayon.  “This is fairly similar to the ways humans learn and recognize,” added Dr. Bijan Tadayon.

ZAC has an impressive team of scientists and developers.  The development is headed by Saied Tadayon, a scientist and veteran software developer, who got his PhD from Cornell at age 23.  ZAC’s world-renowned advisors include Prof. David Lee (Nobel Laureate in Physics), Prof. Mory Gharib (Vice Provost of Research for Caltech), Prof. Robert Buhrman (former Sr. Vice Provost of Research for Cornell), and Prof. Mo Jamshidi (UTSA, Founding Dir. of NASA Center for Autonomous Control Engineering, and a member of US Army Science Board).