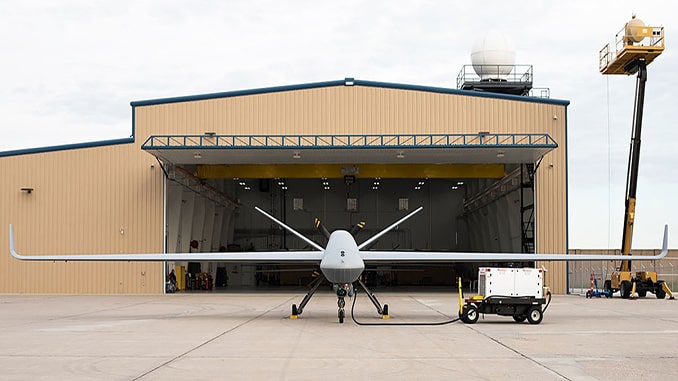 General Atomics Aeronautical Systems, Inc. (GA-ASI) has received a Certificate of Waiver or Authorization (COA) from the Federal Aviation Administration (FAA) for Beyond Visual Line of Sight (BVLOS) operations by utilizing a Ground-based Sense and Avoid (GBSAA) system. The GBSAA system provides an alternative to using a more costly and operationally restrictive chase aircraft.

“Thanks to the support of Senator Hoeven and Grand Forks Air Force Base, GA-ASI will be able to use GBSAA as an alternate and preferred means of compliance,” said David R. Alexander, president, GA-ASI. “This COA will open the skies for more unmanned flights around our North Dakota facility and establish North Dakota as a UAS Training Site of Excellence for the Global Customers.”

The Northern Plains UAS Test Site paved the way for attaining the first Public COA that incorporates the Grand Forks Air Force Base Air Surveillance Radar (ASR)-11 and the L3Harris Technologies VueStation and RangeVue systems to meet “see and avoid” requirements for a significant volume of airspace. The replication to a civil COA enables BVLOS flights to be conducted out of GA-ASI’s Flight Test and Training Center (FTTC) located in the Grand Sky Unmanned Aircraft System (UAS) Business Park near Grand Forks, North Dakota. The FAA authorization has been granted for one year beginning on August 31.

“This is a big step that will help us to advance UAS operations and comes as the result of our work to both fund the DASR-11 radar and secure authorization from the FAA. Requiring a visual observer adds significant cost and complications to UAS operations and limits the ability of General Atomics, Grand Sky, the test site and others to develop this technology, which is why we’ve been working closely with the FAA to allow broader permission for BVLOS flights,” said Senator Hoeven. “By relying on the DASR-11 radar we secured for the Grand Forks Air Force Base, as well as other sense and avoid technologies, General Atomics will be able to fly UAS without an observer or chase plane up to 60 miles from the air base. This is a significant expansion of the company’s unmanned operations in the state, another important step toward safely integrating this technology into our airspace and further proof that North Dakota is the location of choice for UAS research, development, testing and operations.”