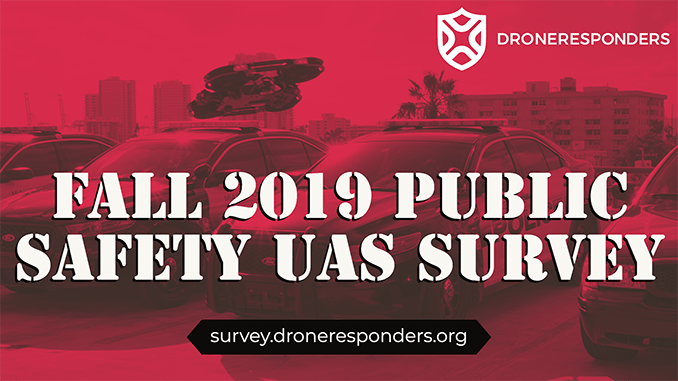 “Our roster of public safety agencies using unmanned aircraft systems continues to grow daily,” says Christopher Todd, a DRONERESPONDERS analyst and advisor who also serves as the Executive Director of AIRT.  “It has been amazing to see the incredible response the program has received from public safety professionals throughout the world.”

DRONERESPONDERS officially launched in April 2019 headed by Chief Charles Werner (ret.) to help support public safety UAS programs and flight operations.  Over the past several months, the program has rapidly blossomed to over 600 member agencies and organizations from 25 countries and counting.  Werner and Todd believe this rapid growth is a clear indication of the need for the type of information that DRONERESPONDERS is working to deliver to the public safety sector.

“This feels like more of a movement than a program,” says Werner.  “The level of support we have been receiving from all corners of the unmanned systems and public safety sectors has been amazing.  We are very thankful for the new partnerships that we continue to forge to help public safety UAS.”

Todd says the growing number of public safety agencies participating in DRONERESPONDERS will help the organization better understand the precise needs of the public safety UAS sector as a whole.  The ability to conduct research surveys with large sample sizes is one of the many ways in which DRONERESPONDERS plans to uncover gaps and trends within the space.

“Up until now, we have spoken about public safety UAS as one large group,” says Todd.  “While that group is united under the flag of public safety, the fact is that law enforcement, fire rescue personnel, and search teams often have different use cases and needs for their drone operations.  We want to drill down into those subsets and uncover their trends and needs.”

The DRONERESPONDERS Fall 2019 Public Safety UAS survey is expected to be open through September 15.  Key findings will be released in the coming weeks after the survey data has been processed and analyzed.  All organizations with public safety UAS program are invited to participate in the survey by visiting: survey.droneresponders.org