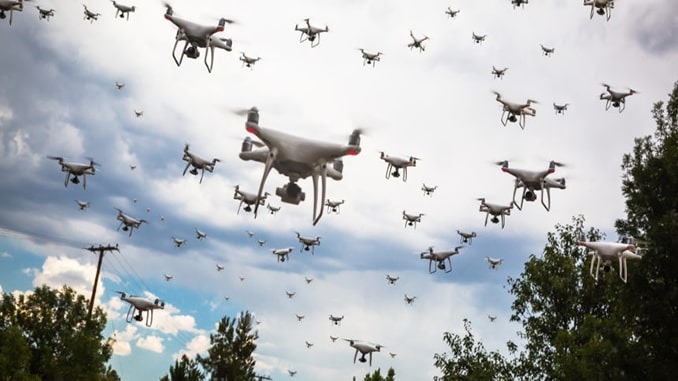 Walmart has reasserted its interest in blockchain-backed drones with a recent patent application.

The commerce giant filed for an application entitled “Cloning Drones Using Blockchain” in January 2019 with the United States Patent and Trademark Office publishing the patent on August 1. The patent for an unmanned aerial vehicle (UAV) blockchain-based coordination system was published the same day as Walmart’s digital currency patent application.

The application is not Walmart’s first foray into blockchain-backed drone tech. In 2017, Walmart sought a patent for a blockchain-based drone package delivery system, among other applications.

According to the patent, blockchain technology is used to transmit information, like drone identification numbers, flight heights, flight speeds, flight routes, battery information, or loading capacity, to other drones. Information can be shared based on the intermediate location between drones.

The benefit of blockchain technology, the patent claims, lies in data integrity:

“A blockchain ledger may store any kind of information that may be stored in any other format or medium, for example, a large list of instructions of different types, navigational information, and maps. In such a way, a same software profile may be deployed across the cloned drones.”

The application joins a host of other UAV applications by the commerce giant with most describing a delivery service of sorts.

Coordination and communication are also listed as valuable uses. By encrypting data on a decentralized ledger, operational parameters can be executed without fear of being compromised.