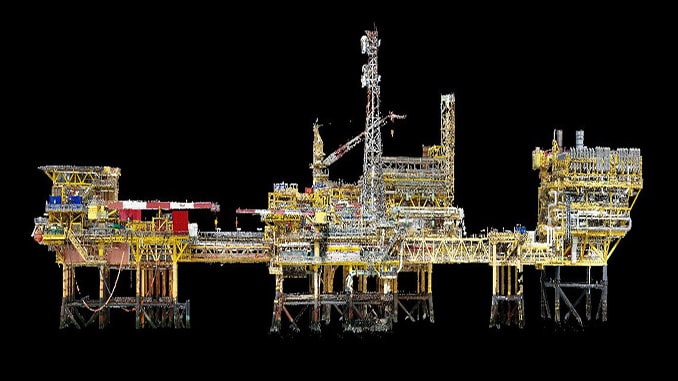 Using modern GNSS techniques, the location of each and every asset on the rig platform was determined to facilitate accurate drill rig positioning Terra Drone Europe, a group company of Terra Drone Corporation, has successfully completed the aerial 3D survey of an offshore platform in the North Sea on behalf of one of the most diversified international oil companies, Shell.

The platform complex that was surveyed was positioned several years ago when GNSS survey techniques were neither very advanced nor common. Several coordinates were known, but as-build drawings do not always represent the current situation. The oil and gas supermajor desired the position of each and every element on the platform to facilitate accurate drill rig positioning.

Terra Drone Europe was thus roped in to capture the as-is conditions with high-precision. Leveraging state-of-the-art surveying techniques, the Terra Drone group company divided the survey into two parts. One was dedicated to creating a 3D point cloud and the second was to accurately check the position of the platform using GNSS readings.

Two GNSS receivers were installed at several different locations on each platform and used to log in the raw data which was later processed. When this data was combined with the 3D point cloud created by Terra Drone Europe, the coordinates of each and every asset on the platform structure could be determined accurately.

Emerging technologies and digitization are fast transforming the oil and gas industry around the world. As one of the largest providers of industrial drone solutions with group companies and technology partners in more than 25 countries, Terra Drone Corporation plays a critical role in this ecosystem.

The past few months have seen the company cement its frontrunner position in the oil and gas sector by establishing new branches focusing on this sector in Argentina, Angola, Kazakhstan, and the United Arab Emirates. Further, Terra Drone has also set up a new branch to provide advanced nondestructive testing and inspection services to the oil and gas industry.

With more than 25 group companies already in its network, Terra Drone takes pride in collaborating with cutting-edge drone technology providers. If you also want to support Terra Drone on its quest to generate aerial innovations that have a lasting impact on communities the world over, please contact info.en@terra-drone.co.jp