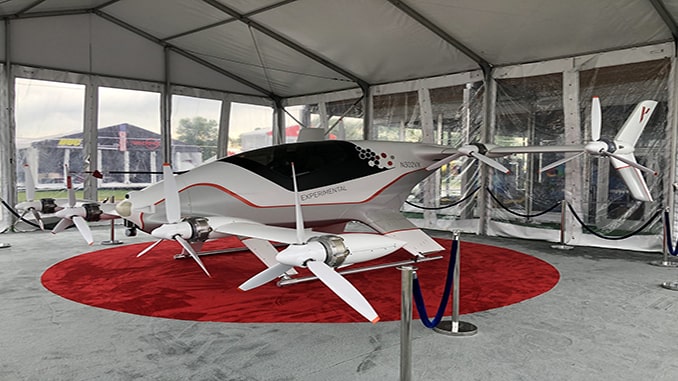 From 22 to 28 July, the largest annual gathering of aviation enthusiasts—EAA AirVenture Oshkosh—is taking place in Wisconsin, USA. Vahana—Airbus Urban Mobility’s electric vertical take-off and landing (eVTOL) demonstrator vehicle—is on display at the air show, underscoring the critical role that electric flight will play in the future of aviation.

The Vahana Alpha Two eVTOL demonstrator—fresh from a week-long stint at the Paris Air Show in mid-June—is now set to capture the imagination of event goers at EAA AirVenture Oshkosh.

Thanks to its forward-looking design and revolutionary vertical electric flight concept, Vahana commands attention, attracting the curiosity of aviation fans and industry professionals alike. In recent years, eVTOL vehicles like Vahana have been fixtures at international air shows in Paris (France), Farnborough (UK), and Oshkosh (USA). And it is not hard to see why: electric-propulsion technology is widely considered the future of aviation in that it pushes the industry towards zero-emission flight.

Today, more than 150 eVTOL concepts are in development in the race to become the world’s first market-ready eVTOL vehicle. According to the Vertical Flight Society, $1 billion has been poured into eVTOL and hybrid VTOL concepts. In addition, industry analysts predict the eVTOL market will reach a cumulative $285 billion in business by 2030.