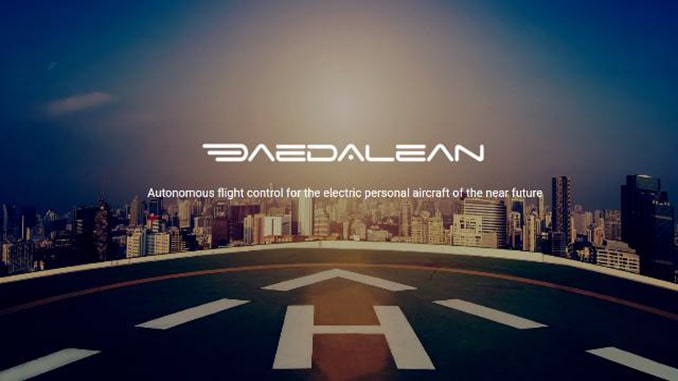 Daedalean, the Zurich-based developer of the first certifiable AI for autonomous piloting and flight control, announces new funding through a group of eminent investors. This additional round brings the total amount of the company funding to CHF 11.8 million.

Founded in 2016, Daedalean builds software for safety-critical avionics, integrating modern robotics, computer vision and deep AI. The product roadmap by the company is aimed to systematically outperform human pilots on all their functions.

The funding round is led by Carthona Capital. Other investing VCs are Redalpine and Amino Capital. Along with them, three former engineering managers of Daedalean’s founder and CEO, Dr Luuk van Dijk, back in his times at Google, are investing as business angels.

Dr Harald Nieder, Partner at Redalpine, is joining Daedalean’s board as an observer. He said: “The Daedalean team is bringing some of the most advanced technology in computer vision and machine learning to aviation, redefining one of the biggest industries. With the surge in new aircraft models, like vertical take-off and landing, future air mobility will be much more individual, flexible and accessible. However, to make it truly scalable, comprehensive autonomy will be required. As a consequence, the big players in this new aviation landscape will be the autonomy providers. This is where we see the big opportunity with Daedalean. It’s a great case of huge commercial potential, while being strongly differentiated by technology.”

On the way to market

The round enables Daedalean to further execute on its plans to launch products based on sensing and perception algorithms. Having identified the limits of human-centered piloting and air traffic control, the company plans to release in 2021 a safety enhancing solution at DAL-C (the Design Assurance Level set for software at the major level of safety-criticalness as defined by aviation authorities). The solution is aimed at being aircraft-agnostic – to work for eVTOL and fly-by-wire aircraft, as well as for traditional aviation. Daedalean, with partners, is conducting flight tests and working on certifying its solutions with major aviation authorities (EASA, FAA).

Full autonomy will be a key enabler for future personal air taxi services. The company’s goal is to develop and certify the world first DAL-A rated autopilot – the highest safety-critical level for a fully autonomous flight. This will empower air mobility, raising to the sky hundreds thousands eVTOLs instead of hundreds. “With the world wide system of civil aviation working at the limits of its capacity already, and with shortages of human pilots and air traffic controllers already impacting the scalability of flight today, a future with small safe and silent personal air taxis is simply infeasible without full autonomy. “ according to Dr Van Dijk, founder and CEO. “As we demonstrated on our recent flight tests with Volocopter and other partners, Daedalean is well on its way to develop the needed capabilities.”

Daedalean was founded in 2016 by a team of engineers who earned their marks at companies like Google and SpaceX. As of July 2019, its team includes 20+ software engineers, as well as avionics specialists and pilots. Daedalean works with major eVTOL companies and leading aerospace manufacturers to specify, build, test and certify a fully autonomous sensor and autopilot system that can reliably and completely replace the human pilot. It has developed systems demonstrating crucial capabilities on a path to certification for airworthiness. Currently the company is working with EASA on an Innovation Partnership Contract to develop concepts of design assurance for neural networks.

The name Daedalean means “in the way of Daedalus”, the mythical craftful inventor known for introducing controlled flight to humanity.

Aireon Announces Landmark Deal With The Airports Authority of India