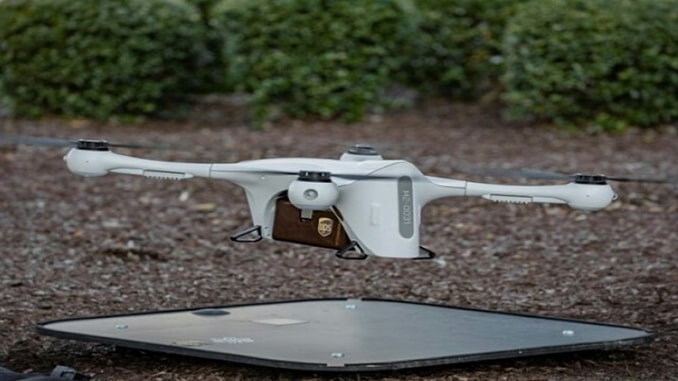 United Parcel Service Inc, the world’s largest package delivery firm, on Tuesday unveiled its drone delivery subsidiary and said it has applied for the Federal Aviation Administration certifications needed to expand the business.

The launch of UPS Flight Forward marks the latest move in the battle between UPS, Amazon.com Inc and Alphabet Inc  for the lead in the nascent U.S. drone delivery industry.

UPS said Flight Forward could receive FAA certification for multiple drones and pilots as early as this year, potentially becoming the first company to win such approvals.

UPS is “laying the foundation” for a sustainable drone delivery business, said Bala Ganesh, vice president of the Advanced Technology Group at UPS.

Ganesh declined to say how much revenue the WakeMed deal generates. UPS plans to expand the scope of its WakeMed delivery business as it recruits other hospital customers.

Flight Forward is targeting healthcare companies as part of an ongoing UPS effort to use higher-profit specialty deliveries to offset the margin squeeze from booming residential e-commerce deliveries.

Reggie Govan, who was chief counsel at the FAA during the Obama administration, said there are significant hurdles to overcome before an army of drones can drop packages at U.S. homes and businesses.

It requires a “more sophisticated and robust technology and regulatory framework than currently exists, including more direct regulation by state and local governments than either the FAA or industry has yet to realize,” Govan said.

Nevertheless, Govan said, every new step forward “helps to move us from one-off deliveries of toothbrushes, coffee and pizza.”

Alphabet’s Wing got a jump on rivals earlier this year when the sister unit of search engine Google became the first company to get U.S. air carrier certification for a single-pilot operation.

Amazon, known for its splashy drone delivery tests, said in June it is building fully electric drones. Amazon has “numerous experimental certifications” to test and evaluate its systems.

UPS, Wing and Amazon Prime Air are among the corporate and government entities with seats on the FAA’s Drone Advisory Committee.