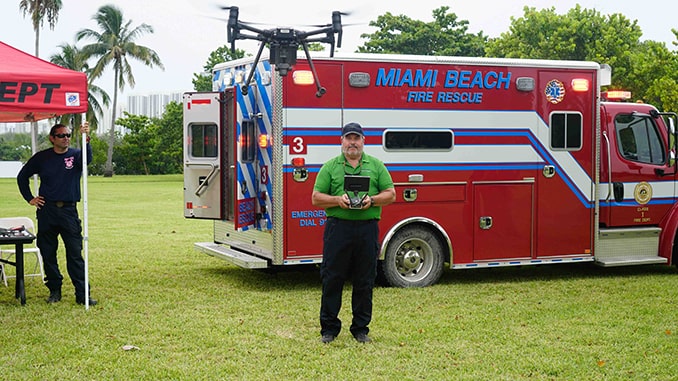 The 2019 Atlantic hurricane season is well underway and while Hurricane Barry was busy causing havoc along the Louisiana coast, South Florida first responders were busy practicing how they would use unmanned aircraft systems (UAS) to help respond to a major storm landfall in their region.

The primary objective of the UAS DRONES Disaster Exercise was to provide a realistic testing environment to assess the various capabilities of first responder drone teams during a large-scale incident response.  Specific UAS evolutions included:

Todd says the UAS exercise at FIU represents a unique event in that unmanned systems are the focal point each evolution rather than an ancillary element of a much larger scenario.  This means participating flights teams receive significantly greater time operating UAS in a variety of situations – exposure they don’t typically receive at most disaster exercises.

“The exercise at FIU allows our drone crews to focus on developing proficiency across a variety of disaster mission scenarios, rather than just experiencing a single exercise mission,” Mestas says.  “This helps build their confidence and skill toward operating UAS under different types of responses.”

Participating teams also battled the hot and humid South Florida climate.  With high humidity and temperatures in the 90’s, remote pilots had to monitor both the condition of their equipment and their crews.

“While we strive for technical proficiency in executing the UAS mission, we also want to ensure our flight teams are making the right decisions while operating in these extreme conditions,” says Lt. Mark Moore, Deputy Emergency Manager for the City of Miami Fire Department.

Moore says responders need to take a wholistic stance on safety when operating drones in extreme weather environments.  Staying hydrated, using adequate sun protection, and watching for signs of heatstroke are just a few of the additional perils that can detrimentally affect UAS operations in tropical climates like South Florida.

For Justine Hollingshead, the Chief of Staff and Assistant Vice Chancellor at NC State University, the harsh conditions reminded her of the days flying drones in the aftermath of Hurricane Florence in North Carolina last September.

“It was hot, it was humid, and it reminded everyone that successfully emergency response operations involve much more than fancy technology,” said Hollingshead.  “The FIU exercise provided the type of environment for drone operations that you just won’t experience in a table-top simulation.”

Hollingshead credits AIRT and FIU for working together to develop the comprehensive weekend program to help better train first responders, academia, and other responding agencies.  It’s a format that she believes could bring value to North Carolina.

“I’ll be sharing my experiences in Florida with our leadership and other stakeholders in North Carolina,” Hollingshead said.  “It is my hope that we can learn from this event to help strengthen emergency drone operations at NC State and beyond.”

While Todd was pleased with the exercise outcomes, he says there is still a great deal of work to be done – especially surrounding data management and geospatial information systems (GIS).

“We are now more prepared than ever to successfully operate drones during disaster operations,” Todd says.  “Now we must move beyond operating the drone and shift the focus to conducting actual remote sensing and harvesting data resulting in actionable intelligence for emergency management.”