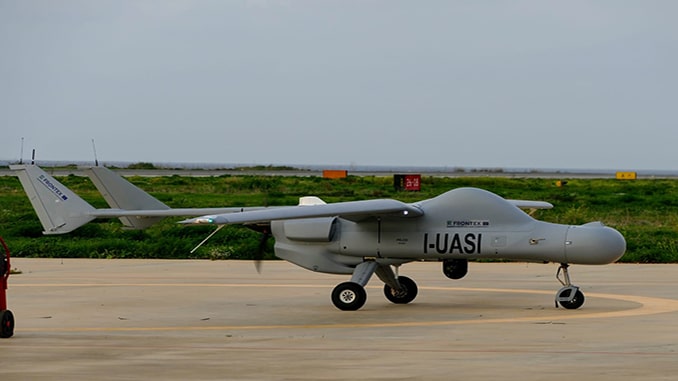 On the 20th June, Leonardo’s Falco EVO tactical remotely-piloted aerial system played a key role in monitoring a case involving irregular migrants in the Mediterranean sea as part of monitoring activities of Frontex, the European Border and Coast Guard Agency. In an operation launched from the Italian island of Lampedusa, the Falco EVO worked with other Frontex assets to identify a “mothership” trawler as 81 illegal migrants were transferred to smaller boats, a technique increasingly used by criminal organizations. Following the transfer, the Falco EVO’s surveillance payloads kept a close eye on the trawler until an enforcement operation was launched by Italian authorities to seize the boat.

The Falco EVO system deployed at Lampedusa Airport has already flown for more than 280 hours on behalf of Frontex, with one mission on the 26th June clocking in at 17 hours and 21 minutes. This extra-long mission came about when Frontex received a request from the Italian Authorities to help monitor two boats in the Lampedusa area. Close collaboration between ENAV, ENAC, AST Lampedusa, the Italian Guardia di Finanza (customs police) and Leonardo allowed the mission finish time to be extended by two hours to 24:00 so that the Falco EVO could support the
interception.

The Falco EVO has been deployed at Lampedusa Airport since December 2018 as part of multipurpose aerial surveillance provided by Frontex. Flights are planned in coordination with the Guardia di Finanza and the Italian Ministry of the Interior and carried out by Leonardo, which owns and operates the Falco EVO under a service arrangement. ENAC, Italy’s national agency for civil aviation, ENAV, the company managing Italy’s civil air traffic, and Lampedusa Airport operator AST Aeroservizi also support the operations.

In its configuration for the Frontex mission, the Falco EVO is equipped with an advanced suite of sensors including the Company’s Gabbiano TS Ultra-Light radar, which is suitable for long-range missions during the day and at night. The Falco EVO is operated and maintained by Leonardo crews.