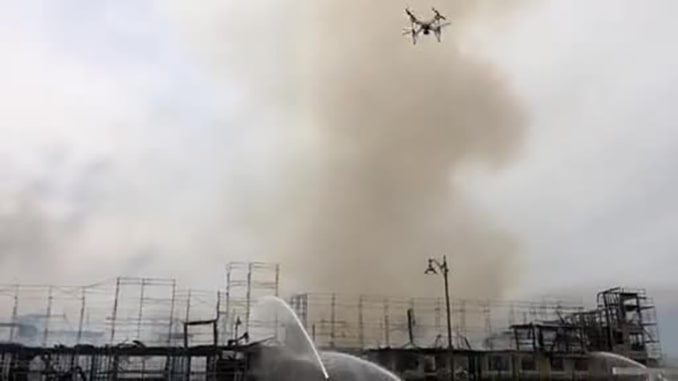 The US-1 unmanned aircraft from startup Impossible Aerospace made another public demonstration on Friday June 28th, this time at a four-alarm construction site fire burning only minutes away from the company’s Santa Clara headquarters. Equipped with thermal and optical sensors, the aircraft hovered on station for one hour and six minutes before the fire was extinguished, demonstrating its industry-leading endurance.

According to Impossible Aerospace, the US-1 delivered high definition thermal video to ground crews, allowing them to easily identify hot spots to share with first responders. The aircraft was operated by Impossible Aerospace pilots as part of the company’s Rapid Response program offered to neighboring agencies.

The US-1 delivers between 78 and 90 minutes of flight time when carrying payloads used by first responders, significantly outperforming other multirotor drones on the market. In other configurations, its flight time has exceeded two hours, says the company.

“We designed the US-1 to deliver the performance of a helicopter at less than one percent of the price,” said Spencer Gore, CEO of Impossible Aerospace. “It’s made for the 99.8% of municipalities that lack air assets. Some call it a drone, but it’s no toy. The US-1 is a performance aircraft made to respond to real emergencies, and it’s built by an American company.”

The US-1 outlasted three other news helicopters that also arrived on scene, according to the company.

As the demand for domestically-sourced aerospace technology continues to rise, Impossible Aerospace is forging partnerships with local governments, police and fire departments, and private customers alike. The best-in-class US-1 has a longer battery life and is integrated with combined thermal and optical sensors built for critical missions.

“We were glad to hear there were no casualties. Santa Clara is our home. We are always here to help if we can,” said Gore.