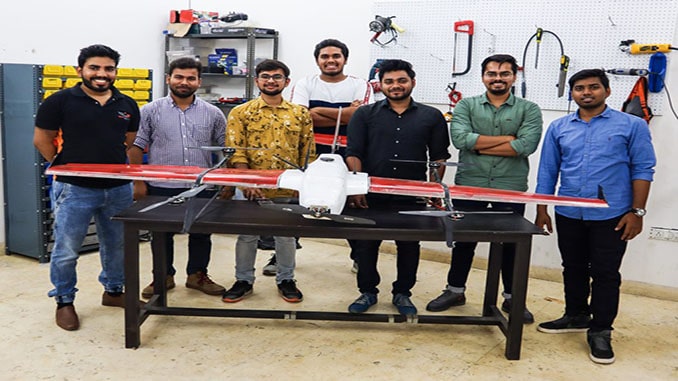 We have been busy trying to build the tech to get your food to you in less than 15 minutes. For us and you, speed means freshness – being able to savor the food that you order as close to the state in which it was prepared by the chef at the restaurant.

Fifteen minutes is only possible if we take the aerial route – roads are not efficient for very fast delivery. While our biker fleet nowadays delivers in 30.5 minutes on an average (which is the fastest in the industry as far as we know), every incremental minute with our fleet becomes harder as it separates our users from their ordered food.

Also, long-distance delivery – let’s say, you are in Gurgaon (outside Delhi) and we want to get you paranthas from Chandni Chowk (35 kms) at the heart of Delhi, in less than 30 minutes – would be impossible on a bike, or in the metro, or even with Usain Bolt. And here’s where TechEagle comes in.

We acquired TechEagle a few months ago to solve this problem, and others along the way – for example, reduce pollution and traffic.

Today, I am excited to share that we’ve been able to successfully test our drone tech. We met all our parameters and were able to cover a distance of 5kms, in about 10 minutes, with a peak speed of 80 kmph, carrying a payload of 5 kgs – using a hybrid drone – fusion of rotary wing and fixed wings on a single drone. This was a non-commercial delivery.

Here’s how drones are going to deliver your food in their first iteration:

A drone will pick up the food package from a restaurant hub (a dispatch station around a cluster of restaurants), and drop the package at a customer hub (a landing station close to dense communities), and come back to the dispatch site using a mix of different and appropriate flight modes.

For the uninitiated, a drone takes off vertically like a helicopter, then transits to an airplane mode to cover the distance and switches back to helicopter mode for vertical landing without requiring any airstrip.

The final design of our drone is lightweight and treats safety as a top priority. It has inbuilt sensors and an onboard computer to sense and avoid static and dynamic objects, overall making it more efficient for autonomous flights. Although being fully automated, each drone is currently being tested with (remote) pilot supervision to ensure 100% safety. Over time, as we have more data, we might not need remote pilot supervision.

In recent years, we have witnessed the inevitable rapid urbanization in many areas, leading to an increase in pollution and congestion on roads. Using drones for delivery would be a big game changer for metros as the idea is to scrape unnecessary traffic off the roads and direct it skyward. Plus, there is less chance of the package being damaged during transit and handling.

As per the notification issued by Director General of Civil Aviation (DGCA) on 13 May 2019, interested organisations have been asked to submit an Expression of Interest (EOI) to the DGCA for conducting experimental Beyond Visual Line of Sight operations (BVLOS) of Remotely Piloted Aircraft Systems (RPAS)/Unmanned Aircraft Systems (UAS). In response to the notification, Zomato is forming a consortium as per DGCA’s guidelines to carry out experimental BVLOS operations.

Food delivery by drones is no longer just a pipe dream. It’s almost here. Regulatory hurdles are not trivial, and the government’s concerns need to be looked at from various (valid) points of view. Having said that, the tech is ready to fly and I am confident that drone delivery will be commonplace sooner rather than later.