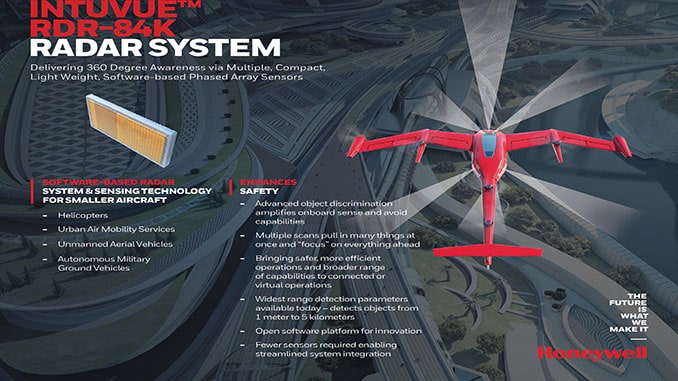 Honeywell (NYSE: HON) has signed an agreement with an unnamed air taxi developer to supply multiple units of its new IntuVueTM RDR-84K Band Radar System for the developer’s urban air mobility (UAM) prototype aircraft. The innovative, compact and lightweight software-based radar detects multiple obstacles in and around its flight path and is a major step toward automating the takeoff and landing of UAM aircraft.

“The RDR-84K is one of the many solutions we offer UAM companies,” said Carl Esposito, president, Electronic Solutions, Honeywell Aerospace. “We’re continuously developing new technology to meet the future demands and needs of all developers so they can create concept UAM aircraft that disrupt transportation and change the way people commute.”

Currently under testing and preproduction, the IntuVue RDR-84K Radar is Honeywell’s next-generation radar system and is built upon Honeywell’s 70 years of experience creating radar and sensor technologies.

Honeywell’s radar relies on the use of software to help collect relevant information for operators. Because the system is software based, the functionality of the radar is customizable depending on use, and the streamlined system allows for more integration.

Unlike traditional, hardware-based radar sensors, the IntuVue RDR-84K uses multiple beams that scan simultaneously and can detect different inputs such as other aircraft, terrain and runways at the same time. It allows an automated vehicle or aircraft to “see” and detect multiple inputs simultaneously, including weather, aircraft, people and buildings — revolutionizing vehicle autonomy. Its benefits include a much better “picture” of everything ahead of the aircraft, an ability to adapt the “focus” on important items ahead, and an ability to customize or change the radar’s functionality.

By scanning multiple data points at once and only focusing on the most important pieces of information below and in front of the vehicle, the radar helps enhance safety. This leads to safer, more efficient operations and a broad range of capabilities for connected or virtual operators.

The software embedded in the new radar technology passes only pertinent information from the sensors to UAM operators, and this enables UAM aircraft to land safely with little to no input from the operator. The sensing technology was designed with smaller aircraft in mind, including helicopters, UAM aircraft, unmanned aircraft and autonomous military ground vehicles.

Honeywell has more than 100 years of experience helping to develop all types of aircraft, and its products fly on tens of thousands of airplanes and rotorcraft worldwide. Earlier this year, the company announced three other UAM development agreements, and Honeywell will continue to identify opportunities that will help bring this new mode of transportation to reality.

DJI Unveils The RoboMaster S1, An Advanced Educational Robot For Tech Enthusiasts Of All Ages