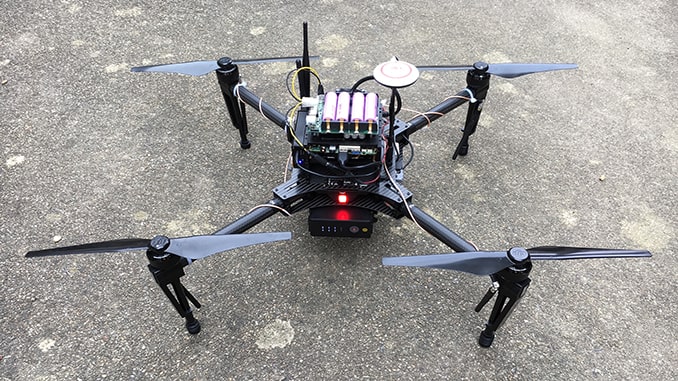 There’s no shortage on the market of products fit for this purpose; most of them, however, focus either on the hardware part (the UAV), or on the software used to collect the data from the ground, and they usually contemplate the presence of a pilot fully dedicated to guiding the drones.

UAV-Retina, an innovation activity promoted by leading European organization EIT Digital within its Digital Cities focus area, was designed to go one step further, by developing drones that can fly autonomously, without the need for human intervention and by offering an all-in-one solution, a hardware and software platform with on-the-fly analysis  that can be used by search and rescue teams to find missing persons or monitoring fires.

Researchers at the University of Rennes (France) are leading the initiative, which will run until the end of this year, teaming up with experts from the Fondazione Bruno Kessler of Trento (Italy), Dutch company Bright Cape and JCP Connect.

“Manual driving is still available, if needed, but in most situations the operator just has to draw a flight perimeter at the start, and the software takes care of all the rest,” Olivier Martineau, CEO of Eole-Eyes,  the startup that was born from the UAV-Retina initiative says. “It’s also possible to tell the drone which areas to avoid.”

No-flight zones can be, for instance, areas on which firefighters want to throw water, in which there’s too much wind, or that will be used to evacuate people. To precisely map the surroundings, the application relies on maps taken from Open Street Map and Bing Maps.

At the same time, real-time data coming from infrared or traditional cameras  is fed to the rescuers so that they can better assess the situation.

The image processing algorithms work in a continuous learning mode, so that the operator’s inputs are used for constant accuracy and precision improvements.

“Telemetry data coming from the drone, battery level and other parameters such as line of communication are constantly monitored by the system to make sure the drone is functioning according to the plan and to recalculate new trajectories if not,” Martineau says.

Strategic planning technologies developed by FBK and Univ Rennes 1 will ensure that each operator can control multiple devices simultaneously and that each drone optimizes the movements, making the most out of the batteries to fly over the areas of interest. JCP Connect  is focusing on drone fleet communication, in case multiple devices are used, and Bright Cape on the data analytics and UX part.

Besides being used to monitor fires and locate people in search and rescue missions, Eole-Eyes drones will be used also to spot hidden Improvised Explosive Devices (IEDs) thanks to a georadar integrated onboard the drone.

Pre-recorded flights on high-risk sites will also be possible: “in the case of chemical plants, for example, firefighters usually have different pre-made scenarios to evacuate people and take care of key points; in the same vein they will be able to load the adapted scenario that will assess the damages in key points and take into account the evacuation plan.”

The startup has obtained all the necessary authorizations to act as an official drone operator and for pictures acquisition and video shooting from air.  The drones themselves, the hardware part, will be made available thanks to a partnership with Hexadrone, a highly-specialized French manufacturer.

The first successful flight tests have already been carried out this spring near Trento, at the training area of the Fire Brigade, and in Rennes.

The product is scheduled to be launched on the market by the end of the year.

No Replies to "UAV-Retina, Future Drones For Emergency Management"