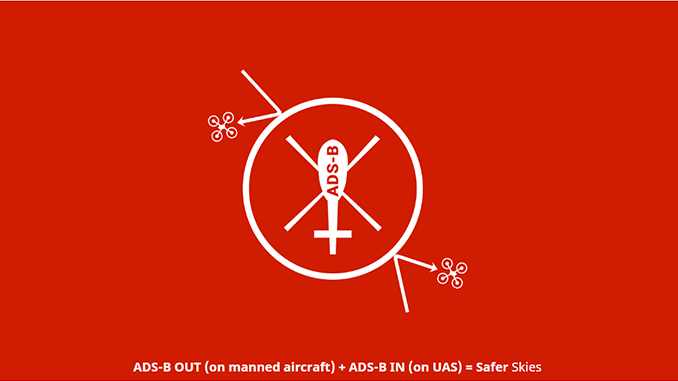 Knowledge Base Presented By uAvionix “ADS-B Is Drone Repellent”

Airspaces around the world are becoming safer by the day thanks to Automatic Dependent Surveillance – Broadcast technology (ADS-B).  Sorry I had to spell that one out – habit, I guess.  If you’re reading this blog, chances are you know what we’re talking about when we mention ADS-B.

It has been a big year in the world of ADS-B for manned and unmanned aircraft alike.  Here’s a quick recap:

This couldn’t be happening at a better time.  I don’t know if the architects of ADS-B envisioned that their concept would become a critical capability helping to usher in the age of unmanned aviation, but without it, a requirement for UAS to remain well clear of manned aircraft would be immeasurably harder and more expensive than it is today – perhaps to the point where a business case for high volume Beyond Visual Line of Sight (BVLOS) operations like package delivery couldn’t be made.  So, let’s talk about how to amplify ADS-B’s safety impact.

I can hear you now already – “but if all drones are equipped with ADS-B out, the spectrum capacity…the clutter, the….”   STOP, just…stop…. breathe, and listen.  That is not what I mean by universal equipage.

Here’s what I mean, it’s a simple equation –

That’s pretty astounding, and it presents a HUGE opportunity to do more.

Like what?  How do we convince the other ~50% of manned aircraft equipped in order to complete the circle?  Per the existing ADS-B mandate – tens of thousands of aircraft aren’t required to equip because they don’t fly in controlled airspace.  Yet – I would argue these are the small, low, and slowaircraft that are at the biggest risk of a collision with a drone.

Let’s take an example.  Let’s postulate that low-flying helicopters are at biggest risk of UAS collision and ultimate damage from such an event.  DJI’s recently published whitepaper titled “Elevating Safety, Protecting the Skies in the Drone Era” examines what it calls “the subset of credible reports: actionable data from verified incidents.”  In doing so, it highlights that the National Transportation Safety Board (NTSB) has never confirmed any report of a drone colliding with an airliner.  “Helicopters however, are more likely than airplanes to fly in unexpected patterns at low altitudes far from airports.  The world’s only confirmed drone collisions, as well as several ‘near misses’ backed by clear and explicit evidence, have been with helicopters at relatively low altitudes.”

Is $9M too much to pay to protect the highest risk category from a UAS collision?  Here are two examples that argue it is not:

Another very high-risk category?  Crop dusters.  I have no idea what the total numbers are here, but I would venture to say that only a small percentage will ever equip with ADS-B under the current rules.

What are we going to do about all of those gliders, balloons, and other non-electrical aircraft that will forever be exempted from equipage rules, and yet can still fly in controlled airspace?  This group will forever represent the “non-cooperative” problem in the UAS industry that billions are being spent on to detect with radar, enhanced vision systems, acoustic systems, etc.  How can we make it easy for them to invest just a little bit of money voluntarily to protect themselves and others from a Mid-Air Collision (MAC)?

We could take a cue from the UK CAA (soon joined by Australia’s CASA) and adopt a standard for portable ADS-B OUT systems.  Guess who is pioneering that space?  uAvionix.  Our portable ADS-B IN/OUT SkyEcho features a TSO-certified GPS for position integrity.  Portable systems like this will never be rule compliant, allow for airspace access, or enable receiving Air Traffic Services (ATS), but why can’t they be used voluntarily for what the UK calls Electronic Conspicuity (EC)?  Isn’t partial compliance better than nothing at all!? SkyEcho runs about $600, and since it is portable, there is no installation cost. Given what companies like Amazon and Google are spending on non-cooperative detection technologies, they could equip the remainder of the entire U.S. fleet with portable and installed ADS-B OUT for a fraction of that investment.  NO BRAINER!

BTW, the U.S. did come up with a semi-portable standard a few years back called a Traffic Awareness Beacon System (TABS) under TSO-C199.  In our opinion, they shot too high on the requirements and effectively killed any manufacturer’s business case.  There isn’t a single TABS transponder on the market almost 5 years after the TSO was published.

Amazing, with one post – I’m sure I’ve ticked off FAA, AOPA, NAA, and HAI!  Oops.  It’s really for your own good, people.

So, now we have a virtuous circle beginning to take shape with the voluntary equipage of ADS-B IN on DJI consumer platforms, and likewise for other OEMs and autopilot manufacturers like Cubepilot who are already doing so.  Bravo to DJI and those manufacturers for having that foresight and safety-minded vision.  Brendan Schulman, DJI’s VP of Policy and Legal Affairs adds “With DJI’s ADS-B announcement, we are demonstrating a commitment to be good airspace citizens to enhance safe drone operations. We identified this step of broadly adopting ADS-B as the best next step to enhancing drone safety.  Of course, our commitment means that encouraging traditional aircraft to equip with ADS-B Out helps to keep them safer from potential drone collisions.” To date, the FAA and other regulators’ vision has been to approach UAS integration with a principle of not impacting how manned aviation operates.  It might be time to think about changing that in this case.  It doesn’t seem that hard or expensive.  Let’s move forward.

Lastly, uAvionix recently provided our inputs to the FAA’s Advanced Notice of Proposed Rulemaking (ANPRM) on Safe and Secure Operations of Small Unmanned Aircraft Systems, and to the UK CAA’s Call for Evidence on Electronic Conspicuity.

In our responses, we touch on topics discussed above, and would like to provide them for your reference below.  Happy reading.