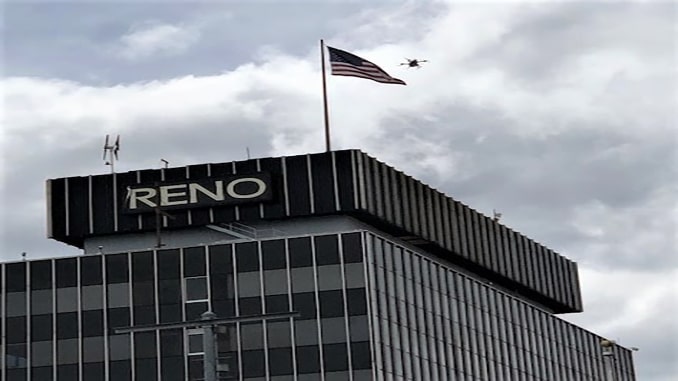 On May 20 and 21, NASA entered the final stage of testing its NASA UTM platform. The agency’s research into drone traffic management focused on operations within a city, at an altitude of 200 to 400 feet, and the unique challenges presented when remote pilots fly beyond visual line of sight in an urban area. The media and public were invited to view the flights throughout the two days.

As part of the City of Reno media engagement plan, the Nevada NASA flight crews demonstrated a series of urban flight maneuvers from remote (autonomous) takeoff and landings locations, beyond visual line of sight by navigating the streets of Reno, and formation flight while the City of Reno interacted through a comprehensive ground safety plan designed to protect the public during the NASA UTM trials.

“The City of Reno is excited to be a participant in this state and national program, and to help facilitate drone testing right here in the downtown Reno area,” said Reno Mayor Hillary Schieve. “We have built an expansive collaboration, which will further The Biggest Little City’s reputation as a technology hub both now and in the future. We are proud to be the only city in the country involved in three drone testing programs, and we urge residents and visitors to go to Reno.gov/UAS to learn more and continue to offer valuable input.”

“We have an incredible Nevada NASA team to advance the NASA UTM TCL 4 and the FAA UTM Pilot Program under the first of its kind FAA Part 107 Waiver for beyond visual line of sight in an urban environment.  The NASA Ames team, Nevada’s congressional delegation, the City of Reno Mayor, and city support has been instrumental in bringing these major drone demonstrations a reality and we couldn’t have done it without this diverse support.  To be the first globally to pull off such complex urban operations and make aviation history is indicative of how the State of Nevada is advancing the national and global drone industry,” said Dr. Chris Walach, Executive Director, Nevada Institute for Autonomous Systems (NIAS), the FAA-designated Nevada UAS Test Site, and the NIAS Unmanned Aviation Safety Center of Excellence.

Additional NIAS and NASA and FAA testing is scheduled for June 17-28 and June 29-July 3. The City of Reno will share updates and details with the media and the public closer to those dates.

About the Nevada Institute for Autonomous Systems (NIAS)