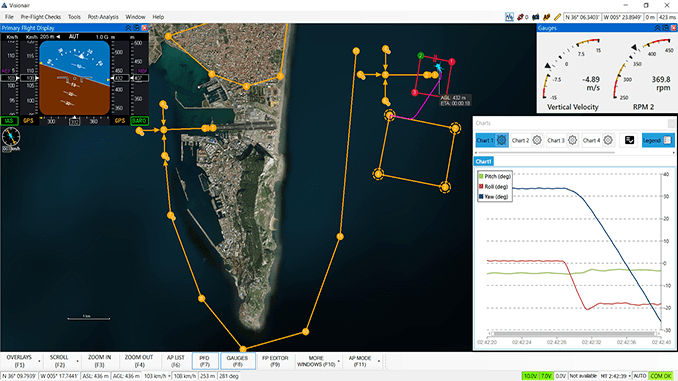 UAV Navigation, a Spanish aerospace company specializing in professional grade autopilots and Flight Control Systems (FCS) for UAVs, will present the latest version of its FCS at XPONENTIAL 2019.

Version 8 is a major upgrade and includes a wide range of new features and improvements for manufacturers of Fixed Wing, Rotary Wing and Target Drone UAVs, including, among others:

At XPONENTIAL the company will also present a new Hardware In the Loop (HIL) simulator to demonstrate the new FCS in action.

The HIL simulator allows the user to run actual flight control software on a real autopilot which is connected to a source of sensor inputs. This allows users to simulate a mission both via the Visionair interface and also via a 3D graphical representation of the UAV in flight. Every kind of mission can be simulated and the robustness of the system can be tested by injecting faults into the system, weather conditions and other parameters to test the autopilot’s reaction.

The HIL simulator can also be used as a useful training tool.

Both Version 8 of the FCS and the new HIL Simulator will be available in 2019.

Please come by and see us at XPONENTIAL in Chicago (Booth 4415).

If you have a platform and need a professional grade autopilot then don’t hesitate to contact us to find out more.