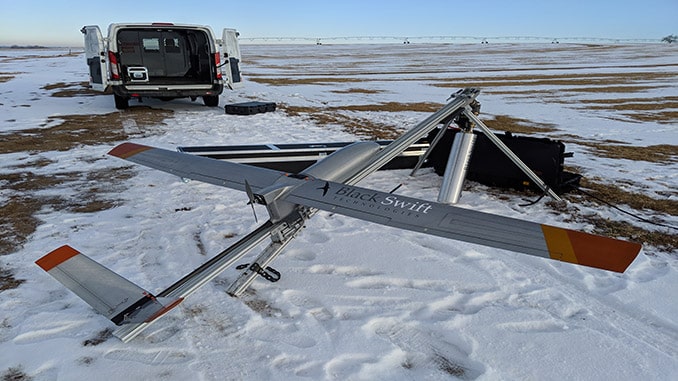 Black Swift Technologies (BST), a specialized engineering firm based in Boulder, CO, announced today its advanced aerial research platform, the Black Swift S2™ UAS, will be deployed in the coming months by the Institute of Arctic and Alpine Research (INSTAAR), part of the University of Colorado Boulder, to conduct high-altitude high-latitude atmospheric research studies in Greenland.  This work is supported by the National Science Foundation (NSF) and is part of the larger international East Greenland Ice-Core Project (EastGRIP)

The Black Swift S2  will operate at temperatures down to -20 °C or colder, and will be flying at altitudes up to 14,000 feet, which is right on the edge of commercial airspace, to make routine atmospheric measurements, something that few other platforms are capable of achieving. For its part in the research studies, the S2 will perform transects or vertical profiles of the arctic atmosphere to analyze the water vapor above the ice sheet to better understand how climate conditions are impacting Greenland’s mass as a result of sublimation, or evaporation, directly into the atmosphere.

Bruce Vaughn, INSTAAR’s lead Research Fellow on the project at CU Boulder, has been conducting isotope research in arctic environments for nearly three decades. The isotopes of the snow and ice represent a fingerprint of the temperature when that water condensed out of a cloud providing researchers with a fairly reliable historical temperature record.  This in turn can be scrutinized along with many other variables measured in the ice core, including dust, volcanic debris, chemical make up, and trapped atmospheric gases.  By analyzing past climate conditions, they hope to gain new knowledge on the timing and response of the ice sheet to changes in a variety of climate drivers, like sea ice extent, and changes in ocean circulation.

“Ice sheets are melting and glaciers are retreating. Greenland is no exception,” Vaughn emphasizes. “Measuring the amount of water vapor above the ice sheet and its isotopes can tell us about its origins, whether it’s coming from the ice sheet or the atmosphere. We have been, during the course of our fieldwork over the last couple of years, taking measurements using a small three- or four-meter tall tower. The data we have captured lets us look at the gradients, in terms of both in water vapor concentration and it’s isotopic signature above the ice sheet. That can tell us a whole lot. But what it doesn’t tell us much about is what’s happening above the boundary layer in the atmosphere and the upper troposphere and how air masses in the stratosphere might be mixing in. This is where the S2 fits into our strategy.”

“We selected the Black Swift S2 for a variety of reasons, not the least of which is the modular payload capability of its nose cone, which I find to be semi-brilliant,” says Vaughn. “The reason that’s so important to us is that we have developed, with BST’s help, interchangeable nose cones that can carry up to eight glass flasks. We utilize their communications to control our nose cone with our flasks in it, along with a valve manifold and a pump that sits in the fuselage. This modular payload design lets take samples, come back down, pull that nose cone off, run it into the tent, hook it up to our analysis, put another nose cone on and go back up with another battery. And then the third nose cone can be flushed with dry air to remove all the water vapor and get reset for another analysis. It’s like juggling. We get three balls to keep in the air”.

While INSTARR uses a variety of gas sampling containers for atmospheric studies, including Mylar, foil, and stainless steel, glass was selected for this application due to the fact that it functions better working with water vapor.

“The other key reason for selecting the S2 is it flight management system. That is a huge bonus for us since none of my crew or myself are pilots,” Vaughn said. “The flight management software BST has developed is absolutely brilliant. It feels pretty idiot-proof. The fact that it can fly so autonomously is just tremendous. It makes our jobs so much easier.”

As Vaughn prepares to depart for this year’s studies, he acknowledges the role the S2 has evolved into at INSTAAR. “The S2 has become an integral part of what we’re trying to accomplish in Greenland,” comments Vaughn. “I’ll be the first to admit that when I see the sparkle in the eyes of my crew (young graduate students) working with the S2, literally playing with a drone in the field, they often respond with something like  ‘Wow, this is cool.’ That wow factor actually plays out with NSF as well. The fact that we’ve had drones in our proposal I think was looked upon with a high regard as the next cutting edge of research tools for the Arctic.”

One of the better-known applications of isotope research focuses on climate studies uncovered in ice cores. When researchers drill an ice core it gives them the ability to go back through time analyzing each annual layer of precipitation in the ice sheet and examine it’s isotopic signature from thousands of years ago through the present.

In a broader context, isotopic measurements are tool scientists can use in a variety of contexts.  For example, they make excellent tracers for understanding sources and sinks of important greenhouse gases like CO2 and methane in today’s atmosphere.  When air bubbles trapped in ice cores are analyzed, they represent time capsules of the atmosphere through hundreds of thousands of years in history. Likewise, isotopes can be used to measure origins of fugitive methane, to determine whether the methane is from livestock, landfills, or from oil and gas operations. These isotopes have proven to be one of nature’s remarkably conservative tracers that remain with the molecule throughout the many processes in nature.

Scientists at the Institute of Arctic and Alpine Research (INSTAAR), part of the University of Colorado Boulder, conduct interdisciplinary research on the physical and biogeochemical processes that drive environmental change. From a historic focus on polar and alpine regions, where effects of global change are especially pronounced, research has broadened to include environmental challenges that span local, regional, and global scales.

The drilling site is on a dynamically active location, where the surface flow velocities are approx. ten times higher compared to previous deep ice core sites. It is located at the onset of the largest ice stream in Greenland. EastGRIP project is both a logistic undertaking and a scientific collaboration of 12 nations. Logistics are coordinated by the Danish Centre for Ice and Climate, the Scotia-based 109thAirlift Wing, and the National Science Foundation.

Based in Boulder, CO and founded in 2011, Black Swift Technologies LLC, is recognized for delivering reliable, robust, and highly accurate unmanned aircraft systems capable of flying scientific payloads in demanding atmospheric environments (high-altitude, corrosive particulates, and strong turbulence). Its purpose-built scientific aerial platforms are used around the globe for a variety of specialized atmospheric research missions in extreme conditions, including monitoring and assessing wildland fires, volcanoes, tornadoes, and hurricanes.

More information on Black Swift Technologies and their suite of UAS solutions can be found at: bst.aero.