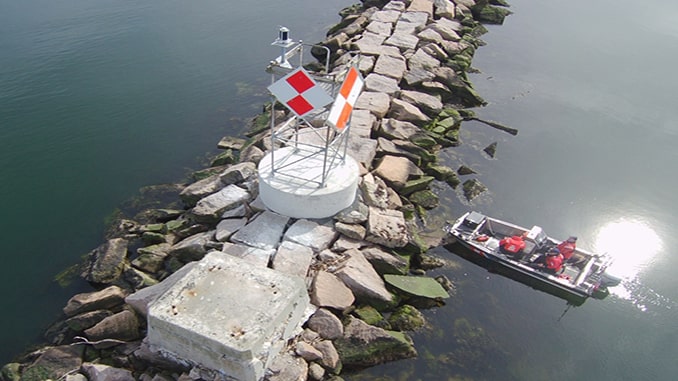 In a first, Lt. Kieron D. McCarthy conducted the inspections by piloting the UAS from a small boat assigned to the New Haven, Connecticut-based U.S. Coast Guard Cutter Bollard (WYTL-65614).

Hand launching the drone from the 16-foot boat, the CEU inspected and approved the steel tower structures that serve as fixed channel markers at Housatonic River, Black Rock, and Duck Island. All of new ATON are located within 30 minutes of New Haven, Connecticut.

McCarthy said using the UAS saved the CEU more than 30 hours of work and reduced the risk of having to climb the structures.

“We were able to complete all three inspections in six hours,” said McCarthy, the project lead and UAS pilot. “The evolution originally had the Bollard getting under way for 12 hours to visit each site.”

“To acquire aerial photographs without the UAS, we would have had to use a contracted helicopter or a Coast Guard helicopter, which would be too costly and impractical,” said McCarthy. “They estimate a helicopter at $14,500 for a day.”

He added that the biggest challenge of operating the UAS from small boat was the confined space.

“Some expert piloting by the coxswain and UAS pilot made for a safe and efficient evolution,” said McCarthy, a U.S. Coast Guard Academy graduate from Upper Lake, California.

McCarthy had to complete Department of Defense UAS training and earn a Federal Aviation Administration pilot certificate to operate the UAS. He has been flying the UAS since his unit received it last June. CEU Providence is one eight CEUs in the U.S. Coast Guard with the UAS capability

“It has proved to be exceptionally helpful with CEU’s mission. Largely for elevated assets or assets over water such as roofs, siding, towers, piers and wave breaks,” said McCarthy. “The UAS has allowed us to be more self-sufficient when it comes to accessing hard to reach assets, so we can better serve our operational partners.”

“We can use it to quickly map and photograph an area immediately after a storm goes through,” said McCarthy.

BM1 Patrick M. Rogers, the executive petty officer and coxswain on USCGC Bollard, drove the small boat during the new ATON inspections. Rogers said the using the drone reduced the time, effort and risk needed to complete the inspections.

“Our aids usually take a minimum of two members to do an inspection in order to have a certified climber and rescue climber,” said Rogers. “The UAS was able to be operated by one person.”

“It can easily do a visual inspection on the actual structure,” said Rogers, a Manorville, New York, native who has served as a coxswain from a variety of different platforms for more than 16 years.

USCGC Bollard breaks ice around the Long Island Sound and elsewhere as needed. The cutter also punches a path through the ice for ferry traffic and other waterborne commerce around Port Jefferson Harbor, New York; Bridgeport, Connecticut; and New London Harbor, Connecticut. In addition to helping frozen waterways stay open during the winter months, the 66-foot harbor tug also maintains 117 Aids to Navigation in the Long Island Sound area.

Rogers said the Unmanned Aerial System could serve as a force multiplier for many U.S. Coast Guard missions, from law enforcement and search and research to ATON verification and ice breaking.

“For ice breaking, we could get a 360 degree view of the condition and develop a plan accordingly,” said Rogers. “Things like ice type and thickness could be recognized from visual stills the UAS could take.”