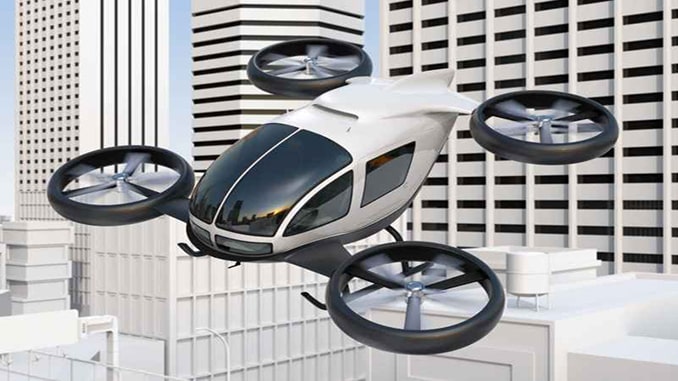 One day, commuting in an unmanned electric flying taxi will be possible: fast, economical, traffic-free – and with a virtual zero-carbon footprint. But we aren’t there yet. Infrastructure improvements, regulatory decisions, safety issues – and assignment of insurance liability – must be addressed long before the technology “takes off.”

CURRENT STATE
There are currently more than 130 companies producing and testing prototype electric vertical take-off and landing (eVTOLs), as tracked by the Vertical Flight Society (VFS) World eVTOL Aircraft Directory 1 . Such companies have attracted over $1bn in investment in a market valued between $500bn to $2trn – companies including some of the world’s largest aerospace manufacturers (Airbus, Bell, Boeing, Embraer), automotive companies (Audi, Honda, Rolls Royce, Toyota), and technology leaders/investors (Google, Intel, Uber). The potential is for over 100,000 commercial manned/unmanned electric aircraft to flood the market once an integrated support system is in place 2 .

Yet, after applying operational constraints and barriers, only 0.5% (between $2.5bn and $10bn) of potential capital can be realized in the near term, according to the U.S. National Aeronautical and Space Administration (NASA) 3 . Fully-operational eVTOL investment is a long-term play.

Before such technology is accepted, however, there are significant challenges, driven by four overarching areas: infrastructure; vehicle inventory; regulations; and safety.

VEHICLE INVENTORY
Although many companies are investing in various concepts, and some are already flight- testing, the lack of inventory is a major problem. Before being functional, years of vehicle testing and development are needed.

One bottleneck is battery capacity, as power loss is a safety issue. Charging requirements need to evolve from recharging after every flight to recharging after five or so flights for full operational functionality. Performance degradation occurs as batteries lose power during flight, whereas efficiency actually improves as fuel is burned and weight is decreased with
conventional aircraft.

Thousands of eVTOLs will need to be ready once UAM services launch – estimated to reach 23,000 by 2035, in a $32 billion passenger market. Currently, no company makes more than 700 vehicles a year. Mass production will require considerable investment.

REGULATIONS
Regulatory approvals and certification testing for eVTOLs will also need to be worked out. Asia and Middle East markets are more prepared to move forward than the U.S. and Europe. Only Dubai and Singapore are developing air taxi systems to launch within the next few years, although unmanned cargo operations are in full test-mode in 64 municipal areas around the world.

The Federal Aviation Administration is shy about integrating UAM technology into the national airspace, a position likely to harden as more airport near-misses with small unmanned aircraft are reported.

Less conservative, the European Aviation Safety Agency (EASA) issued a proposal of airworthiness standards in October 2018 to clear initial hurdles enabling the safe operation of piloted air taxi and eVTOL aircraft in Europe 4 – unmanned regulations have not yet been codified.

As UAM technology contributes new propulsion systems and vehicles that haven’t been certified or addressed by regulations, stringent testing requirements will necessarily follow.

SAFETY
The transition to unmanned passenger service will require a substantial shift of public trust. A fatal accident in the early years of development would damage confidence, investment and enthusiasm for the technology. The key to this technology will be a demonstrably safe, well- tested and certified vehicle.

Without a pilot on board, a new automated communication and guidance system will need to be developed, performing identical functions as a manned crew while rapidly responding to ATC instructions to avoid traffic, weather or similar hazards. Safety measures will have to be robust to attract riders – and investors. In case of accidents, liability questions will shift from pilots to developers, manufacturers or operators.

INSURANCE AND AIR TAXIS
Like any new product, risk exposures will need to be assessed by insurers, but adequate historical data doesn’t yet exist, aside from small UAS claims. Once authorities have cleared the technology, the public may embrace it, and insurers will step-up their commitment to offer solutions. Hull and physical damage coverages will be similar to aviation coverages that already exist, while liability scenarios will change.

For smaller unmanned aircraft systems (UAS), the amount of damage or injury capable of being inflicted is relatively minimal. With a human passenger onboard, the potential liability escalates considerably. Aviation insurance will continue evolving and the industry will develop insurance products to understand, mitigate and manage risk and create the safest possible environment for UAMs to thrive, once the market evolves.