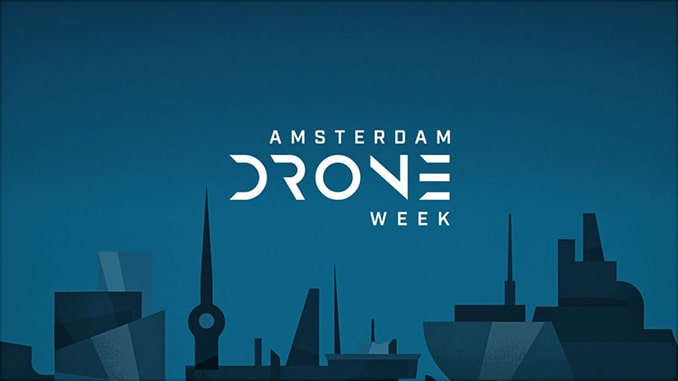 Amsterdam Drone Week and global organizer of Commercial UAV Expo Europe, Diversified Communications, are joining forces to host a combined tradeshow and conference focusing on drones. The end result is the biggest drone platform in Europe which will take place 30 November – 4 December 2020 at the RAI in Amsterdam. The partnership was announced this morning at Commercial UAV Expo Europe at the RAI in Amsterdam.

The Commercial UAV (unmanned aerial vehicles) Expo Americas has been hosted in Las Vegas since 2015. The main focus of the Expo is companies that use drones for a wide range of commercial applications in top vertical markets for drone integration and operation such as surveying & mapping, precision agriculture, construction, energy and utilities, public safety and emergency services and more. Exhibitors showcase airframes, software, sensors and services. Commercial UAV Expo Europe is now in its third edition. In 2018 another major drone event, the Amsterdam Drone Week, was held in the RAI Amsterdam congress and exhibition center.

For its part, the Amsterdam Drone Week will be hosting the ‘ADW: Global Urban Air Mobility Forum’.  This international conference will take place for the first time in 2019 during the Amsterdam Drone Week. The conference will be organized in collaboration with the so-called EIP-SCC-UAM Initiative, which already counts 41 European cities among its participants. The goal is to facilitate the safe use of innovative drone applications such as ambulance drones.

Hub
According to exhibition manager Nynke Lipsius of the Amsterdam Drone Week, both events add to each other’s strengths, substantively as well as conceptually. ‘The Amsterdam Drone Week is a platform that serves as a bridge between all relevant parties including the authorities as well as parties from the aviation, telecom, and automotive sectors’ explains Lipsius. ‘It allows these parties to discuss infrastructure, regulations, and UAS technology with the shared goal of facilitating Urban Air Mobility (UAM) and thereby creating new opportunities in urban areas for improvements in mobility, safety, sustainability, and spatial and economic development. This in turn, creates opportunities for further growth in the vertical industries focused on by the Commercial UAV Expo trade fair. The Amsterdam Drone Week is actually the hub around which the applications are created and developed.’

The organizers of Commercial UAV Expo see their collaboration as a partnership between the present and the future. ‘We are very focused on what is happening now. Who’s using drones commercially and for what purpose?’ explains Lisa Murray from the international event organizer Diversified Communications. ‘We focus on smaller drones that are used for applications such as inspections and monitoring and surveying &mapping within numerous sectors. The Amsterdam Drone Week is more focused on the big players and the direction that the drone industry will take during the coming 5 to 10 years including urban air mobility. Of course, that’s also very important for us. For example, the industry needs to know which regulations will be put in place in future. If the regulations formulated allow more people to actually use drones, the entire industry will benefit.’

About Amsterdam Drone Week
Amsterdam Drone Week takes place from 2 up to and including 6 December 2019 and is an initiative of the top RAI executive Paul Riemens, who is also the former head of the air-traffic management authority in the Netherlands. It was first held in 2018, and participants include start-ups, technology companies, and scientific institutes. Policymakers from a great many countries are also in attendance. Various European conferences are hosted during the week, and the spotlight is also squarely on technological developments. In addition, (flight) demonstrations take place with the newest generation of drones and special applications.

About Commercial UAV Expo
Commercial UAV Expo focuses on drone solutions for surveying and mapping, energy and public utilities, construction, agriculture & forestry, infrastructure & transport, and public safety & emergency services. This includes the use of drones for visual imaging and monitoring. Commercial UAV Expo was first held in 2015 in Las Vegas, USA. Two years later, its European sister fair first opened its doors, and in 2018 the European trade fair was hosted in Amsterdam. 1,000 visitors from a total of 65 countries are expected to attend the 2019 event taking place 8-10 April at the RAI. Commercial UAV Expo Europe is organized by the international media company Diversified Communications.

Knowledge Base: US Army Studying Drone Delivery Of Essential Supplies