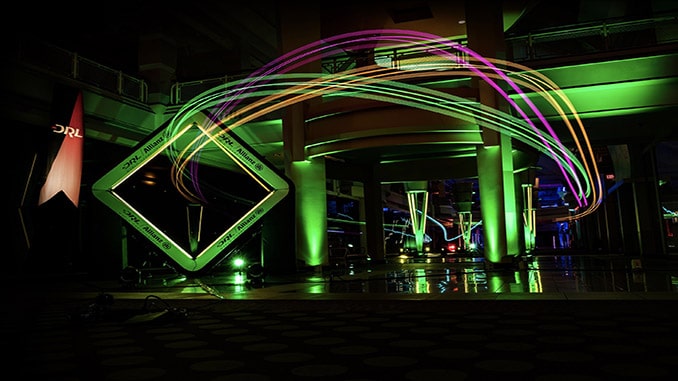 The Drone Racing League Launches 2019 Season with Twitter and NBC

The Drone Racing League (DRL), the world’s only professional drone racing circuit, today announced a new streaming partnership with Twitter and broadcast agreement with NBC and NBC Sports (NBCSN) to air the 2019 DRL Allianz World Championship Season. Premiering on Sunday, August 11, 2019 at 2pm ET on NBC and Twitter, DRL will extend its global reach on premier sports networks and increase access to fans of the world’s fast-growing sport.

Currently bringing a wide range of video content from the biggest leagues and esports partners, Twitter is collaborating with DRL to expand into robotic sports and share non-stop drone racing action on Twitter for the first time. DRL’s partnership with NBC and NBCSN, the U.S. television home of motorsports, will offer racing fans the opportunity to watch more than 44 hours of DRL coverage on NBC and NBCSN alongside NASCAR, INDYCAR, and Pro Motocross in 2019. For the first time ever, DRL will feature pro drone racing content concurrently on all screens, including mobile phones, tablets, PCs, and TVs, immersing fans worldwide into their thrilling FPV (First Person View) action.

“Over the last three years, the number one request we got from fans was to bring DRL to an always-on digital platform. And now, by merging the Sport of the Future with the future of broadcast, we’ll give millions of fans the opportunity to watch DRL season races and video-game-like sports content anytime, anywhere — all while authentically engaging our integrated partners on an array of mediums across the planet,” said DRL CEO & Founder Nicholas Horbaczewski.

Starting in August, sports fans can tune into DRL on NBCSN and Twitter via @DroneRaceLeague, binging on high-speed, minute-long heats throughout the 2019 DRL Allianz World Championship Season. Fans can now engage as real-time commentators and follow elite pilots as they race (and crash) identical, custom-built DRL drones at 90+ MPH through 3D courses with sky-high dives, inverted loops, and razor-sharp turns in iconic venues like palaces, museums and football stadiums around the world.

“The fast, non-stop action of the Drone Racing League fits perfectly with the always-on nature of Twitter,” said TJ Adeshola, Head of US Sports Partnerships at Twitter. “We’re excited to bring live video content from this futuristic robotic sport and pair it with the already active conversation around DRL all in one place on Twitter.”

“Speed and racing are featured throughout the events that NBC Sports covers, from Olympic sports to motorsports and horse racing’s Triple Crown,” said Jeff Macaluso, Senior Director, Programming, NBC Sports. “The Drone Racing League showcases a unique blend of speed and skill and we’re excited to partner with them for the 2019 and 2020 seasons.”

DRL recently announced a three-year partnership with Youku, one of the largest streaming networks in China. To date, more than 57 million fans have tuned into DRL’s first three seasons, which were exclusively broadcast on linear TV.