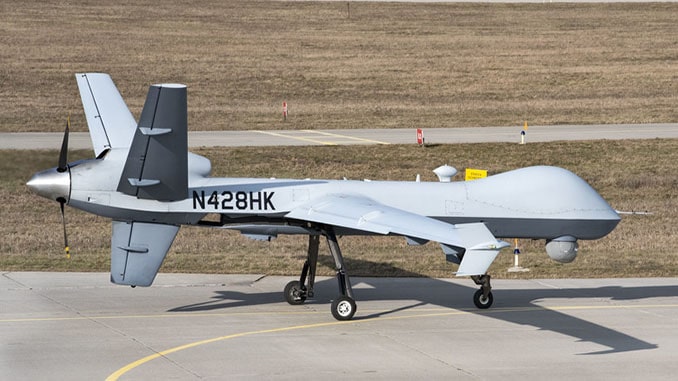 The event marked the opening of new facilities at the detachment and celebrated the 52nd EOG reaching full operational capability.

“In addition to the completion of these projects, another important change is the remotely piloted aircraft here are now operated by both contractors and U.S. military personnel,” said U.S. Air Force Brig. Gen. Greg Semmel, Air National Guard assistant to the commander, United States Air Forces in Europe-Air Forces Africa. “This flexibility allows for the addition of new missions, and having U.S. military personnel expands the variety of missions we can accomplish.”

Contractors and U.S. military now share control during operations such as the takeoff, mission, and recovery of the aircraft. Currently, the Air National Guard is the U.S. military presence operating the remotely piloted MQ-9 Reaper aircraft there, providing intelligence, surveillance and reconnaissance in support of U.S. foreign policy security. The currently configured unarmed aircraft provides valuable force protection data to the U.S. and international partners.

“I would like to express my gratitude to all of our U.S. friends for all you have done so far with the MQ-9 operation to provide for European security,” said Polish air force Col. Lukasz Andrzejewski, 12th Unmanned Aerial Vehicle base commander, Miroslawiec AB. “We appreciate all the support, involvement, openness and kindness you give us every day.”

Det. 2 works closely with the Polish air force on its mission of operating the MQ-9. Many U.S. personnel assigned there have developed strong relationships with the partnered nation.

Semmel said the U.S. and Poland have had a long-standing partnership to address issues on regional and global security. The mission at Det. 2 further facilitates this partnership by increasing overall readiness, honing the ability to operate in a rapidly changing environment, and by building upon the enduring and strategic relationship between the two nations.

“Over the years our proven partnership with Poland has been built upon shared values, experience and vision,” said Semmel. “As our environment continues to change, forward locations like Det. 2 become that much more critical at enhancing our ability to safeguard European security.”