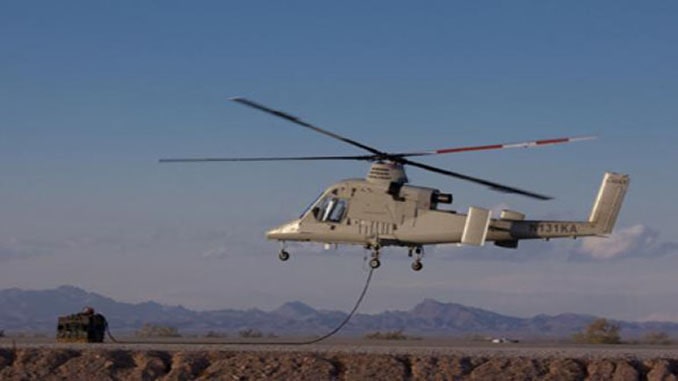 Kaman Aerospace Group, a division of Kaman Corporation, announced today that it is developing the next generation K-MAX® unmanned aircraft system that will allow operators to have the capability to fly either manned or unmanned missions. Kaman expects to offer unmanned system kits for new production and existing aircraft in 2020.

Concurrently, Kaman is exploring opportunities to support the U.S. Marine Corps in developing co-use versions of autonomous aerial technologies that will have both commercial and military applications.

“Whether the need is night-time aerial firefighting, resupplying troops in austere environments or delivering critical supplies in support of humanitarian missions, the next generation of the unmanned K-MAX® will continue to demonstrate its unmatched readiness and efficiency no matter the requirement,” stated Roger Wassmuth, Senior Director Business Development, Air Vehicles & MRO Division.

The unmanned K-MAX® has a proven record providing combat support while reducing the risks faced by our service men and women. In the 33 months the unmanned K-MAX® supported the U.S. Marine Corps in Afghanistan on combat resupply and logistical support missions, they moved over 1.5 million pounds of cargo to remote outposts. Typically operating at night, these unmanned missions replaced the equivalent of 900 convoy vehicles and eliminated 46,000 hours of exposure time to IED’s, direct fire and other threats to our troops on dangerous roads.

“We are excited to take the next step in advancing co-use unmanned capabilities for commercial operators while at the same time building on our history in supporting the U.S. Military,” stated Darlene Smith, VP & GM, Air Vehicles & MRO Division.

Development of the K-MAX® was led by Kaman founder and former CEO, aviation pioneer Charles H. Kaman, and received Federal Aviation Administration certification in 1994. The single-engine, single-seat K-MAX® is a rugged low-maintenance aircraft that features a counter-rotating rotor system and is optimized for external load operations and designed specifically for vertical reference flight. The aircraft can lift up to 6,000 pounds (2,722 kg).

More information is available at www.kaman.com.