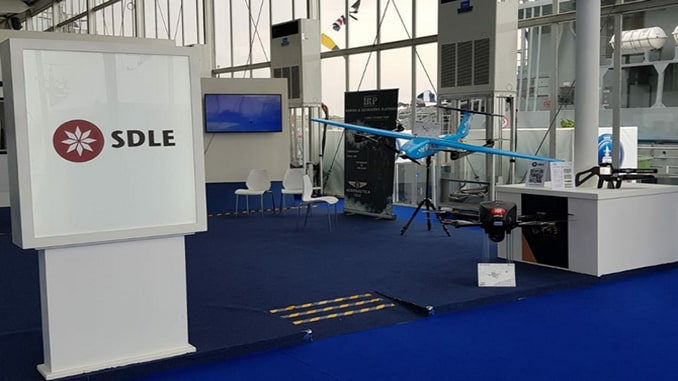 Star Defense Logistics & Engineering (SDLE) was exhibitor, for the third consecutive time, at the International Defense Exhibition (IDEX) in Abu Dhabi. SDLE showcased its new unmanned aerial vehicle (UAV) for security indoor operations, in addition to its full range of unmanned aerial vehicles and its antidrone system for threats detection and inhibition.

Besides the UAV for military use, SDLE offers unmanned aerial systems for security and emergency operations. The Madrid-based company has rapid deployment multicopters, fixed-wing systems specially designed for intelligence, surveillance and reconnaissance (ISR) missions, and fixed-wing UAV with the added value of vertical take off and landing capability (VTOL). All of them fully manufactured by SDLE with a secure warranty.

One of the SDLE’ better-performing systems is the Zarek in its second version (Zarek v2), a fixed-wing UAV with VTOL capability. Its weight is less than 25 kilos, it reaches nine hours endurance -the maximum flying time for a UAV of these capacities- and a cruising speed of 100 kilometers per hour, achieving higher altitudes than its competitors this segment.

Another SDLE product, the indoor light drone is one of the latest SDLE developments about to hit the market. This UAV was specifically designed for security forces operations, and its exceeds the performances of all the UAV indoor solutions known so far. It is a small dimensions drone, operable with one hand, with more than 15 minutes endurance and stability control for GPS-denied environments.

The SDLE Aeronautical division designs and adapts its unmanned systems to specific needs, such as surveillance and reconnaissance, critical infrastructure protection and inspection or improvement of the situational awareness of land vehicles.

The SDLE antidrone system is one of the fewest having demonstrated effectiveness on neutralizing a limitless number of unmanned aerial vehicles, an increasingly demanded capacity due to the criminal use of drones and its use as swarms. This antidrone gun works properly protecting fixed infrastructures and in a man-portable way. It is highly ergonomic to transport and efective againts aerial threats, neutralizes the remote control, telemetry, video link and GPS / GLONASS transmission.

SDLE just turned 10 years old, time in which it got a leader position as supplier of spare parts, maintenance and modernization services for military land vehicles. Nowadays, SDLE has presence in more than 25 countries, is official supplier of NATO and United Nations.