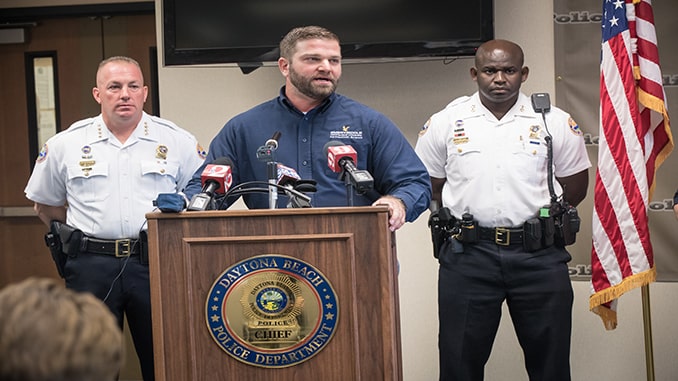 When the Daytona Beach Police Department (DBPD) got the call that a man suspected of having killed one person and injured two others was holed up in an Ormond Beach motel, they assembled a six-person team trained to apprehend him.

The usual procedure was for three officers to approach from the front, while three would cover the back of the building.

This time, though, the police department had a “force multiplier,” according to DBPD Officer and Embry-Riddle Aeronautical University Professor Anthony Galante—an unmanned aircraft system, or drone, that could easily provide a lookout for out back.

“Six officers were able to go in the front and confront the suspect,” Galante said. “He was really outnumbered, and he surrendered.”

The DBPD launched a program incorporating unmanned aircraft systems (UAS) in 2017 with the assistance of Embry-Riddle. In addition to helping arrest dangerous suspects, the department’s five drones have assisted in search and rescue operations and provided sophisticated damage assessments of a hurricane. They have also delivered a bird’s-eye view and infrared heat mapping of a burning building for firefighters trying to train their hoses effectively and avoid walking near hot spots on the building’s roof.

“Having a UAS program can absolutely make a community safer,” said DBPD Sgt. Tim Ehrenkaufer. Drones can help with “catching criminals, removing the threat of them re-vicitimizing and watching over crowds during large events, like the Daytona 500 or Daytona Bike Week,” he added.

“Using UAS,” said Galante, “we can save people’s lives and make the job safer.”

Galante is an assistant professor of Aeronautical Science, specializing in UAS, at Embry-Riddle. He is also the police department’s aviation safety officer, after having retired from full-time work with the force in 2015.

He points out that the department’s trained aviation officers conduct a risk assessment before every flight. The assessment yields a score, and that score indicates a course of action, including not taking off at all.

“When shots are fired, we’re running toward the gunfire, so we’re used to risk,” said Galante, who has participated in many operations as a leading member of the department’s SWAT team. “But we don’t take unnecessary risks. Ever.”

The DBPD and Embry-Riddle, which launched the first Unmanned and Autonomous Systems Operations degree program in the nation in 2011, have worked hard to create a program that follows all U.S. Department of Justice regulations regarding civil liberties and all Federal Aviation Administration safety rules.

Robbins said Embry-Riddle trains professional UAS pilots to safely integrate UAS into the National Airspace. With more than 1,500 students enrolled university-wide in its undergraduate and graduate UAS degree programs, Embry-Riddle is believed to be the nation’s largest UAS educator.

The DBPD owns five drones, Galante noted. Intended for different missions, they differ in size (from 1.5 pounds to 15 pounds) and function. The department’s DJI Matrice 210s, for example, can carry two payloads. One is an electronic optical camera that can zoom in on an area to assess damage such as after a hurricane or indicate where a criminal suspect is hiding. The other payload is an infrared camera that detects heat such as hot spots on a burning building’s roof, or the body heat of a person hiding or needing to be rescued.

“The deployment of UAS for the DBPD has become invaluable,” said Sgt. Ehrenkaufer. “We are seeing increased requests from officers for a UAS response. A bulk of the requests have been for missing Alzheimer’s patients from assisted living homes, and also to help locate suspects fleeing from a house or car burglary.”

Galante is quick to point out that the DBPD’s UAS operation follows the same U.S. Department of Justice rules and regulations as any other law enforcement work. The same rules apply regarding warrants and the overall protection of civil liberties.

Galante also emphasizes that the DBPD’s UAS operation follows all of the same safety regulations as any aircraft aviation unit. “We follow the same rules as manned aircraft,” Galante said. “The only difference is we don’t sit in the planes.”