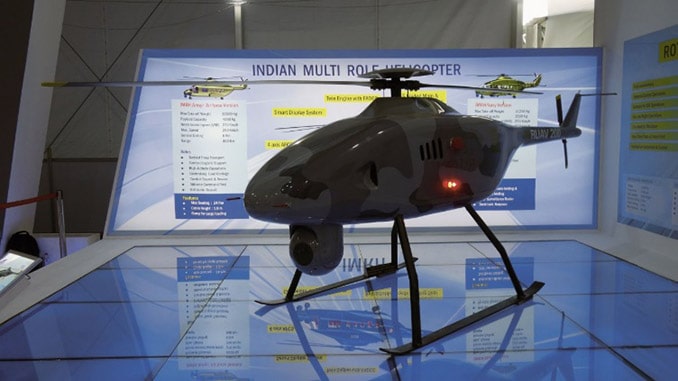 Specifically designed to perform intelligence, surveillance, and reconnaissance (ISR) operations, the UAV was developed by HAL in co-operation with the country’s Aeronautical Development Establishment (ADE) and the Indian Institute of Technology (IIT), Kanpur, to meet specific requirements of the Indian Army and Indian Navy.

The 200 kg UAV, which is equipped with a twin-blade main rotor and a locally developed petrol engine, is stated to have a range of 200 km, endurance of six hours, and a service ceiling of 6,000 m. The platform, the fuselage of which is 4.2 m long and 1.28 m wide, is reportedly capable of flying at a top speed of 200 km/h and can carry a 40 kg payload.

The UAV, which features a full‐authority digital engine control (FADEC) and SLR-DC datalink, can fly in fully autonomous mode, including auto take-off and landing with a return-to-home recovery option, according to HAL. It uses GPS for interactive command and control with completely programmable mission management computers. Real-time data and video links are available for line-of-sight operations.