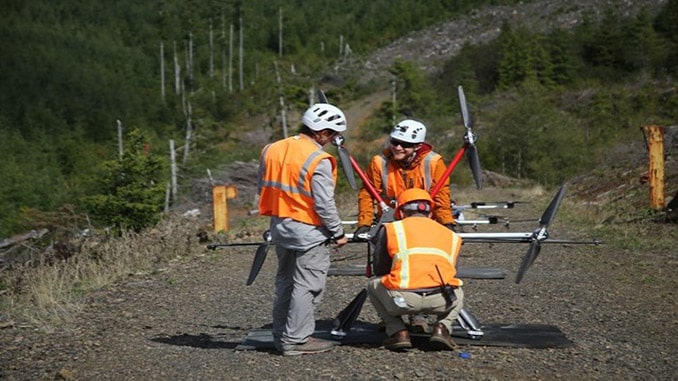 Seattle-based DroneSeed and The Nature Conservancy Oregon have signed a contract to utilize drone swarms to restore rangelands affected by invasive species and re-seed native plants, which is vital to conservation of the ecosystem and imperiled species, like the sage-grouse. The contract with DroneSeed provides The Nature Conservancy access to drone swarm technology designed to scale to plant and protect significant acreage while planting in precision areas to boost survival rates.

The aircraft operate in swarms of up to five drones and as a group service greater area faster despite terrain. To provide precision seeding, the company uses software to aerially deploy seed vessels to targeted areas, called microsites, where they’ll grow best. To service significant acreage, DroneSeed’s heavy lift aircraft carry 57 lbs. of seed vessels per drone. These vessels improve seed survival by reducing desiccation or ‘drying up,’ which is a common problem on arid rangelands. DroneSeed will be aerially deploying its own proprietary seed vessels and vessels developed by The Nature Conservancy and its partners.

DroneSeed is the first and only company approved by the FAA to operate with swarms of up to five aircraft weighing more than 55 lbs.

Restoration of sagebrush steppe habitat in the western U.S. is a significant challenge. The sagebrush steppe is being lost at an alarming rate – only 50 percent still exists, with the remaining 50 percent at risk of being lost in just the next 50 years. More than 350 species of wildlife depend on this habitat as do rural ranching communities. Both people and nature are challenged by invasive weeds and increasingly large and frequent wildfires. Many groups, such as federal and state governments, NGOs, and the ranching industry are rising to the challenge, but need new tools to be successful. The Nature Conservancy is working across the west to explore new ways to increase success and reduce costs.

Jay Kerby, Southeast Oregon Project Manager at The Nature Conservancy said, “Working with research partners, we have been testing a variety of high-tech solutions for restoration seeding. We’re excited to get some first-hand experience with the new options that drones could provide, such as improved precision of mapping and seeding priority treatment areas. For this project, we’ll be mapping about 75 acres of sagebrush habitat with scattered weed patches that are inefficient to target and treat with conventional methods. We are always looking for ways to innovate, especially when it can help us increase the pace and scale of habitat restoration to benefit both nature and people. We are excited to work with DroneSeed to explore the possibilities.”

DroneSeed’s CEO and Founder Grant Canary said, “The Nature Conservancy is an ideal partner for us as we’re highly aligned on mission and are both engaged in developing and advancing technology solutions for conservation outcomes. Our objective with this project is to test and demonstrate that this innovative approach can achieve successful restoration faster and more efficiently than conventional methods.”

The drone swarm technology and its design for scalable planting have future implications. The organization Nature4Climate recently published in a peer-reviewed paper that ‘natural climate solutions’ such as restoring rangelands, planting forests, and conserving habitat could provide 1/3 of the global emissions reductions called for under the Paris Agreement. The Nature Conservancy is a partner of Nature4Climate with the International Union of Concerned Scientists, UN-REDD, The World Resources Institute, and the Woods Hole Research Center.

DroneSeed’s technology has numerous applications for industry post-wildfire. DroneSeed recently completed its first post-fire forestry project for one of the top five timber companies in the U.S., which was impacted by the Grave Creek Fire near Medford, OR which burned over 7,000 acres. Rather than planting seedlings that require a two-year wait to grow in greenhouses, they opted to plant immediately with DroneSeed’s seed vessels and reduce later vegetation clearing costs.

About The Nature Conservancy

The Nature Conservancy is a global conservation organization dedicated to conserving the lands and waters on which all life depends. Guided by science, we create innovative, on-the-ground solutions to our world’s toughest challenges so that nature and people can thrive together. We are tackling climate change, conserving lands, waters and oceans at an unprecedented scale, providing food and water sustainably and helping make cities more sustainable. Working in 72 countries, we use a collaborative approach that engages local communities, governments, the private sector, and other partners.

DroneSeed is paid per acre as a service to restore forests and rangelands using drone swarms. It currently operates with four aircraft simultaneously, each weighing up to 115 lbs. and capable of delivering up to 57 lbs. of payload in the form of tree seeds, herbicides, fertilizer and water per aircraft per flight. The company has been operating since 2016 under contracts with three of the five largest timber companies in the U.S.

Israel's Rafael To Buy Out Drone Maker Aeronautics For $235 Million