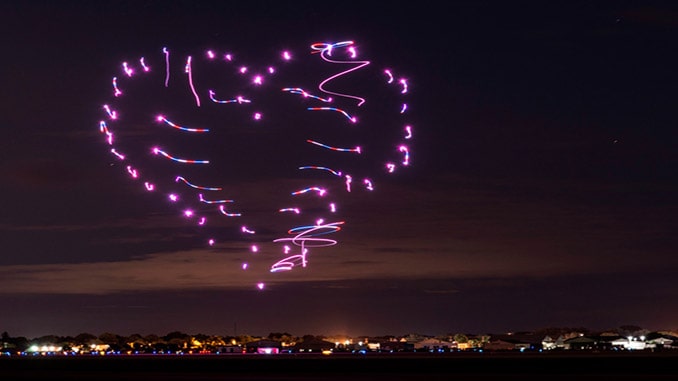 The dazzling drone light show that made its debut at EAA AirVenture Oshkosh last year is returning in 2019, with more than 100 lighted drones taking flight during the night air shows on July 24 and 27 during the “World’s Greatest Aviation Celebration.”

The 67th annual Experimental Aircraft Association fly-in convention is July 22-28 at Wittman Regional Airport in Oshkosh, Wisconsin. The night air shows have become a favorite of the weeklong event, featuring a new perspective on the precise flying skills displayed by aerobatic pilots.

The EAA AirVenture demonstrations will expand on the 2018 debut by Great Lakes Drone Company, based in Watervliet, Michigan. The company is one of just three U.S. companies authorized by the FAA for such displays.

“EAA and Great Lakes Drone Company worked closely with the FAA to make this pioneering and innovative event possible in 2018, and we’re aiming for even bigger things this year,” said Dave Chaimson, EAA’s vice president of marketing and business development. “What makes this event especially memorable are the intricate maneuvers that are capable by more than 100 synchronized drones, highlighting the possibilities of safe and responsible drone flying.”

Great Lakes Drone Company has done numerous drone shows as stand-alone highlights at events and has been invited to additional air shows after last year’s performance at Oshkosh. During AirVenture, the LED-equipped drones will perform a 10-minute custom-designed “The History of Flight” show complete with musical accompaniment. The company will also exhibit during AirVenture in the Main Aircraft Display area, giving an opportunity for attendees to engage throughout the week with the drone operators and software developers.

“Through the combined efforts of EAA, the FAA and Great Lakes Drone Company, last year we made history in the infancy of the commercial UAS industry by incorporating a commercial UAS operation into an active air show performance,” said Matt Quinn, president of the Great Lakes Drone Company. “We cannot imagine a more appropriate venue to perform with our self-built fleet at the home of homebuilt aviation. EAA AirVenture will be forever our ‘air show home’ where together we push the boundaries of aerial entertainment. Like any other aerial performer returning to Oshkosh, we will be doing it bigger, better and providing the audience an experience of a lifetime!”

The EAA AirVenture Oshkosh night air shows begin at 8 p.m. on July 24 and July 27, and are included with AirVenture admission. Announced schedules are subject to change based on weather or operational conditions.