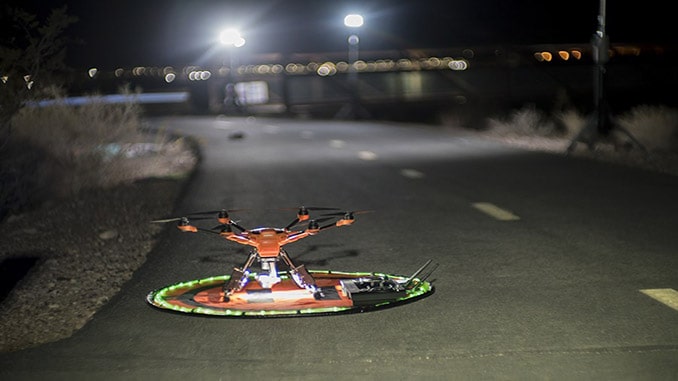 On Wednesday January 23th, 2019, Sundance Media Group along with FoxFury Lighting Solutions, Westwind Unmanned Vehicles, Yuneec Aviation, Pix4D, and Autel Robotics hosted a nighttime drone crime scene investigation demonstration in Henderson, Nevada. Recreating a homicide scene at a local equestrian park, the demonstration sought to use drones to capture forensic evidence at the scene in the dark and map it in 2D and 3D for law enforcement use.

The demonstration started at 6:00 pm PST. Douglas Spotted Eagle from Sundance Media Groupgreeted the attendees representing law enforcement, security services, and international delegations. The group moved into position along the perimeter of the scene to watch as the Sundance Media Group crew worked to show what would happen if law enforcement was arriving at the murder scene and mapping it for the first time.

A model, outfitted with moulage, laid out as a murder victim. FoxFury Lighting Solutions provided four Nomad® T56 Scene Lights to illuminate the surrounding area to aid with photo and video capture. These lights offer 95 CRI 5600K daylight balanced light allowing accurate color representations in the photos and video collected, which is extremely important when examining the scene at a later date. Douglas Spotted Eagle, Director of Education for Sundance Media Group, said, “Without the daylight-balanced T56 lighting system from FoxFury, color-correct images cannot be captured on scene, leaving investigators a task of color balancing images after the photographs have been captured.” Other scene lights were positioned around the park for attendee safety and location marking.

Two drone launch pads were positioned at one end of the scene, one holding an Autel Evo, the other holding a Yuneec H520. The Autel Evo flew for 30 minutes, manually capturing 60 frames per second of 4k resolutions images as well as recording video up to 100mbps. This was the first time Autel showcased their new LiveDeck™ technology, allowing the aircraft footage to be seen LIVE at the Sundance Media Group A.V.O.C. (Aerial Vehicle Operations Center).  Once the data was captured, it was imported into Pix4DMapper software where it verified the images and began to compile maps and models of the scene that were available for attendees to view on a large monitor within a few minutes.

The goal of this demonstration was to show attendees how this combination of portable lighting, drone hardware, and Pix4DMapper software can significantly reduce field and surveying time for law enforcement officials while increasing the accuracy of the investigation. There is also a safety benefit as officials can evaluate a scene from a safe distance rather than putting themselves in harm’s way. Attendees walked away with a deeper understanding of how this technology could contribute to their specific needs in their parts of the world. Watch the event video here.

Due to an increased demand in this type of data gathering, similar demonstrations and workshops will be offered throughout the year. Information will be posted through Sundance Media Group and FoxFury Lighting Solutions as it becomes available.  If you’d like Sundance Media Group to bring a Night UAV CSI training or demonstration event to your area, please contact them here.

At FoxFury Lighting Solutions, we create premium lighting tools that shine brightly in the most extreme environments to keep people safe. Our Xtremium™ products focus on durability and speed, providing unique solutions and possibilities for first responders, enterprise professionals, and videographers in over 65 countries. There is no second chance when it comes to getting the correct lighting. So, when seconds count, depend on FoxFury Lighting Solutions.