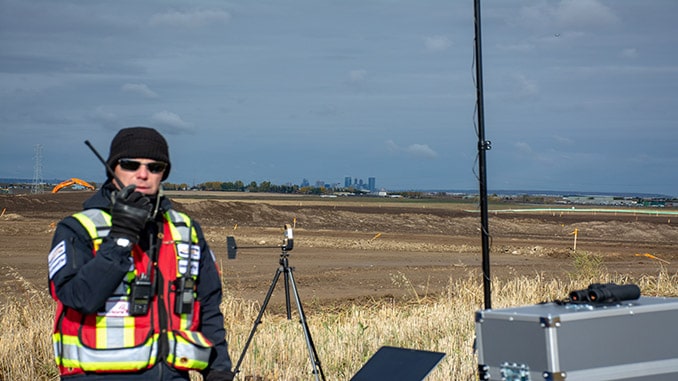 IN-FLIGHT Data, one of Canada’s leading commercial drone operators, has been awarded three GUINNESS WORLD RECORDS™ for drone (UAS) flights recently carried out as part of a groundbreaking BVLOS project with help from senseFly, the industry’s leading provider of fixed-wing drone solutions.

The pioneering project has seen IN-FLIGHT Data awarded three world records for flights carried out during the innovative Canadian project, including:

The GUINNESS WORLD RECORDS™ were awarded specifically for BVLOS flights conducted in Calgary, Alberta, which saw the City of Calgary commission IN-FLIGHT Data to collect mapping data for the development of Calgary’s first new cemetery since 1940. This resulted in IN-FLIGHT Data completing North America’s first urban BVLOS drone project in a
major urban area. Using a senseFly eBee Plus fixed-wing drone, IN-FLIGHT Data successfully conducted a total of 414 km (257 mi) BVLOS flight, at an average distance of 2.35 km (1.46 mi) from the pilot.

“The success of this groundbreaking project was a real milestone for us and the wider UAS industry, and we are over the moon to now become GUINNESS WORLD RECORD™ holders,” said Chris Healy, owner of IN-FLIGHT Data. “Not only did we demonstrate that BVLOS operations can be carried out in urban environments, thanks to the senseFly drones and the other airspace intelligence technologies built into their eMotion software that made it possible, we were also able to show that BVLOS is a safe, efficient and cost-effective tool that has the potential to revolutionize both rural and urban commercial drone operations.”

“As one of the first-ever BVLOS UAS operations to take place inside a built-up, densely populated city environment, the learnings and insights that Chris and his team have gained from this project will prove invaluable in helping shape the future of Canadian BVLOS regulations,” added senseFly CEO

Gilles Labossière. “We are delighted to have played a role in obtaining these record-breaking results and we are excited to see how they might contribute to further optimizing the efficiency of BVLOS operations in urban environments around the world.”

In addition to helping IN-FLIGHT Data’s team navigate challenging ground access restrictions at the site, BVLOS operations also helped reduce the environmental impact of the cemetery project, ensuring there was minimal disruption to local wildlife. Following the project’s completion, the data was delivered to the City of Calgary and is currently being
used to support the development of the new graveyard site. It will also help drive future innovation in High River and the city of Calgary as a whole.

“The City of Calgary is working to make city-owned land like Ralph Klein Park and the Southeast Cemetery, in this case, more accessible for the testing of technological innovation,” said Monique Nesset, Smart City Lead with The City of Calgary. “This can help support increased economic diversification and jobs for Calgarians.”

Tom Maier, High River Town Manager also added: “High River is always looking for ways to advance our community. With a progressive and supportive Town Council behind us, we are always looking forward and are attuned to supporting and developing technologies that open more opportunities for our residents and businesses. The digital world is shifting, and with partners like Chris Healy and IN-FLIGHT Data, we are embracing this shift.”

About senseFly
At senseFly we believe in using technology to make work safer and more efficient. Our proven drone solutions simplify the collection and analysis of geospatial data, allowing professionals in surveying, agriculture, engineering and humanitarian aid to make better decisions, faster. Founded in 2009, senseFly is the commercial drone subsidiary of Parrot Group.

For more information, go to www.sensefly.com.

About IN-FLIGHT Data
Since 2014, IN-FLIGHT Data has been delivering timely, high-quality spatial data acquisition that our
partners and customers have trusted to make important business and mission-critical decisions.
IN-FLIGHT Data has a proven track record of safe UAV operations with zero safety incidents over
work sites that are routinely measured in sections. We work on projects using compliant aircraft and
field-tested procedures to ensure the highest quality aerial work anywhere in Canada, for some of
Canada’s largest and most respected companies, organizations and government agencies.

The UK's Tempest's Unmanned 'Loyal Wingmen' To Be Carrier Capable