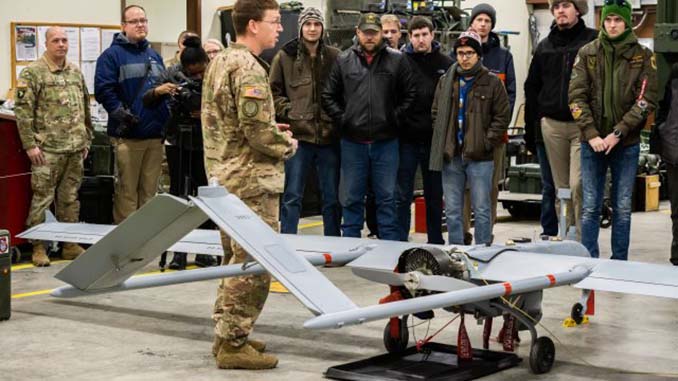 Students Partner With Soldiers To Learn About Drones, Tech Careers

Students from the Kansas State University Polytechnic Campus toured 1st Infantry Division UAS facilities, meeting with Soldiers and learning about the Shadow and Gray Eagle from Army maintainers and pilots.

It’s important for everyone to understand how both sides of the fence operate, said retired Chief Warrant Officer 4 Sam Kleinbeck, a Kansas State UAS professor. Kleinbeck, who retired from military service at Fort Riley, was one of the original warrant officers who started the Army’s large UAS program.

This was the first time Horton saw Fenix Company’s Gray Eagles up close and in person.

“It’s cool to get a sneak peek at what I could possibly be doing in the future,” Horton said.

The visit was a privilege and a great chance for the students to get exposure to the military sector, said David Burchfield, teaching assistant professor in the K-State Unmanned Systems Flight and Operations Program.

“And I think it’s great for the Soldiers to be able to see what we do, too,” he added.

“They just need to know that there’s more out there for UAS and what those Soldiers out there are doing for their country, for UAS and to build that bridge because they are all going to be working together eventually at some point,” Kleinbeck said.

It’s good to have people to relate to, said Spc. Keith Grayson, a UAS maintainer assigned to Fenix Company.

“Especially someone outside the military because a lot of people — even people in the military — barely know what’s going on here,” he said of the work done in the company.

Grayson saw value in the interaction with students.

“Being in a field like this you end up contracting and you could end up working for the government and you’ll be out there with us,” he said of students. “You’ll be helping us send aircraft up or making major maintenance changes to the aircraft and system upgrades.”

Contractors and Soldiers work closely together in the UAS world.

“These could be future co-workers,” Grayson said. “There’s a lot of guys like me that plan on … moving on to the same career field, but outside of the military.”

Horton liked being around the Soldiers, people he called highly skilled who know what they’re doing.

“It’s cool to be around those kinds of people and be able to ask them questions,” he added.

Kleinbeck is working to make the ties even stronger amidst a big shift in academic and the Department of Defense. Many Soldiers who have the most UAS experience don’t get degrees when they get out of the Army, and civilian companies are looking for the experience with the schooling.

“So we’re trying to build that bridge between us where the Soldiers that have the experience, we can give them the education that they need to succeed in life after the Army,” he said.

Kleinbeck wants to intermix the two, especially in the classroom. He wants to put Soldiers and civilians in the same classroom so they can discuss future projects and work together in completing their educations.

“The Soldiers have the experience and the civilians have the education, so we need to put them together not just bridge a gap — literally mix them in together to move UAS forward.”

Together, these two groups have the drive to push UAS into the next century, Kleinbeck said.

No Replies to "Students Partner With Soldiers To Learn About Drones, Tech Careers"