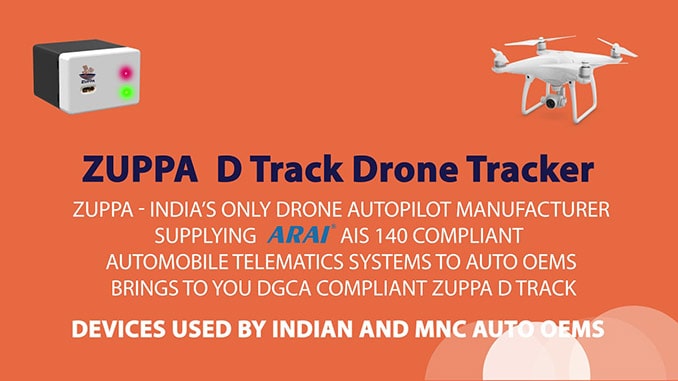 Sree Sai Aerotech Innovations Pvt Ltd., which is the only completely indigenous manufacturer of Made-in-India drone autopilots and GPS Tracking Systems under the brand name of Zuppa, has set its sight on tapping the $1.85 billion global market for ‘Regulatory Flight Modules’ (RFM) with the development and launch of India’s first and only ‘Counter Drone’ product – Zuppa NPNT Compliant RFM ‘Zuppa D’Track‘.

The Zuppa D’Track RFM will enable monitoring and keeping a check on drone flights as it is equipped to send alerts in case of violations of route and altitude, tampering and crashing or intrution of geo-fence no-fly zones by drones. The device will, thus, also enable on-boarding of the 5 lakh unregistered drones in India as it will help the operators to comply with the NPNT requirements, which mandate all drone manufacturers to implement firmware and hardware changes that only allow flights authorized by DGCA to physically take-off.

The launch of India’s first indigenously designed and manufactured NPNT Compliant RFM also assumes significance because of the ever increasing requirements for both passive and aggressive counter drone products both in India and globally due to the increasing security and air traffic threats posed by over 40 million unregistered, predominantly illegal China made drones, operating across the world.

Elaborating on the reasons for growing demand for sophisticated Counter Drone products, Mr. Sai Pattabiram, Founder and Managing Director, Sree Sai Aerotech Innovations Pvt Ltd., said: “Incidents of drone violations in sensitive areas such as airports, army installations etc. are continuously on the rise. Airspace regulators in India and across the world are facing the daunting task of regulating the millions of drones which have the potential to intrude the civilian airspace and cause serious damage. This is what is fuelling the demand for both passive and aggressive counter drone products and the ‘Zuppa D Track RFM ‘ is a ‘Make in India‘ Global First product the company is pursuing following the recent launch of India’s Drone Regulations and Roadmap.”

Going by the global drone shipment statistics, currently the population density of drones is 600 per Commercial Airplane, which is expected to double in three years. The global anti-drone market size is also anticipated to reach USD 1.85 billion by 2024, according to a new report by Grand View Research, Inc. registering a 24.1% CAGR.

It is against this backdrop that ZUPPA sees a huge opportunity to use its in-depth knowledge and its proprietary AI technology to address the global demand for counter drone products and developing the NPNT compliant drone regulatory retrofit device ‘Zuppa D Track RFM’ is the first step in this direction.

Sree Sai Aerotech Innovations Pvt Ltd (SSAI), better known as Zuppa, is a completely India grown drone manufacturing company, founded in the year 2008, by a father-son duo, Sai Pattabiram and Venkatesh Sai. The organization aims at scaling up to a 100 crore company by 2020.

The innovations of Zuppa has been evaluated and seeded under TANSTIA – FNF Germany’s Innovation voucher program. The organization has also been funded by the Department of Science and Technology under the TIFAC-SIDBI Srijan Fund, after evaluating the technical competency of the company and its product Zuppa Autopilot, by a series of committees set up by TIFAC comprising of domain experts from DRDO, IITs, IISC and Industry.