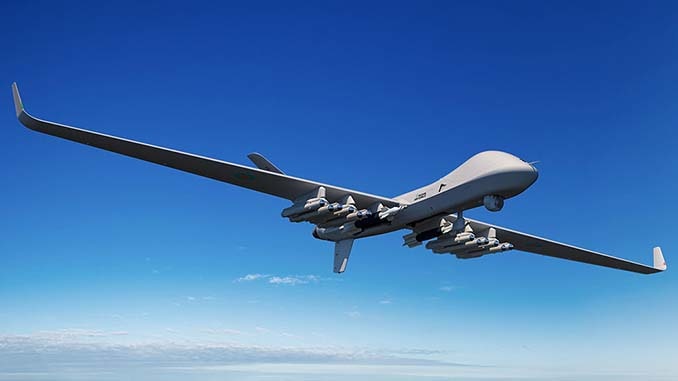 MBDA and BAE Systems have received contract supporting the future operational capability of the future Royal Air Force’s (RAF) Protector RG Mk1 remotely piloted aircraft (RPA) as it enters service towards the mid-2020s. MBDA will provide integration of the Brimstone precision guided strike missile onto the drone. Company officials are confident that the integration will be completed in time for the Protector’s planned entry to service. The team will have at least five years for this task, as the induction of the new drone is not expected before 2024. BAE Systems signed a contract to support RPA’s airspace integration required to allow the drone flying over populated areas in UK and Europe.

Protector RG Mk1 is the new, weaponized variant of General Atomics’ SkyGuardian, an RPA based on the MQ-9B Reaper redesigned as a certifiable RPA. Protector was initially intended to enter service in 2018 to replace the MQ-9 Reaper currently in RAF service. However, the service entry date was postponed to 2021 and then pushed back further. The number of aircraft procured also dropped from 20 to 16 aircraft.

The Brimstone missile is a lightweight (50 kg) strike missile with an advanced dual-mode mmW/SAL seeker offering a unique capability of engaging a wide range of target types, including fast moving vehicles on land and at sea in both direct and indirect modes. Apart from the Brimstone missiles Protector will also be cleared to carry Raytheon’s Paveway IV Laser/GPS guided bombs.

The Protector RG Mk1 has nine underwing weapon stations, each can carry three Brimstone missiles, thus offering a much higher loadout than the Reaper platform it will replace. The integration of Brimstone onto Protector RG Mk1 follows a series of successful firing trials of Brimstone from the Reaper/Predator B aircraft in the United States that demonstrated the advancement in the performance that Brimstone offers.

The new RPA was designed to comply with national and international airspace and safety regulations, a requirement most current RPAS do not meet. Redesigned as a ‘certifiable’ aircraft that airworthiness requirements under NATO STANAG 4671. Once completed, this certification will enable the RAF to operate the drones from their designated home base, RAF Waddington, transit the unmanned aircraft without the restrictions currently limiting training over the UK and Europe, and access remote areas of operation anywhere in the world. Current RAF drones operate from remote bases and in theaters of operations where they fly under military airspace control. Offering the certification roadmap for the SkyGuardian helped General Atomics win sales in recent competitions in Europe, such as in Belgium and Spain, customers which raised concern about the use of RPA in their countries.

BAE Systems has joined the team supporting the UK airspace integration process. While the RPA will be certifiable to meet civilian flight regulation, the lack of on-board due regard radar that provides autonomous air-traffic detection capability limits the drone’s autonomous flight capability. BAE Systems will implement other Concepts of Operations (CONOPS) required for operations in UK airspace, within the capabilities made available for the system. SkyGuardian has the space, power and cooling for a due regard radar but such a system was not included in the Protector RG Mk1 project. Such device could be added in the future.