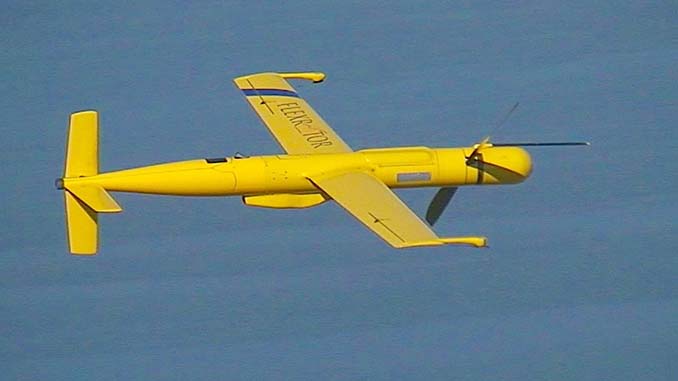 Silvus Technologies, Inc. announced today that it is supplying the wireless datalink used on the Aerovel Flexrotor, in pursuit of the US ARMY Family of Tactical UAS (FTUAS) program.

Flexrotor is a 50lb. UAS designed for maritime and land-based operations. Needing only a 20′ by 20′ area for launch and recovery, Flexrotor takes off and lands vertically (VTOL) and easily transitions into horizontal wing-borne flight. It flies completely automatically after takeoff, with no pilot intervention needed.

Aerovel’s Tad McGeer explained, “We use the Silvus radios to downlink real-time video over ranges up to 100 km, and simultaneously to access IP addresses on the aircraft and by relay to other surface stations. The onboard radio provides this throughput while staying within our constraints on weight and power consumption, which are essential for Flexrotor to be both small and highly capable.”

The SC4200 is a 2×2 MIMO Software Defined Radio (SDR) featuring Silvus’s proprietary MN-MIMO waveform which supports high bandwidth Mobile Ad Hoc Networking (MANET) in urban, rural, and maritime environments. Other unique attributes include Transmit Eigen Beamforming (a MIMO technique which boosts signal strength 2-4x), dual-band interference mitigation capabilities, and a miniature form factor just 0.75″ thick and the footprint of a typical business card. Kasey Cooper, Director of Unmanned Systems at Silvus Technologies comments, “Flexrotor introduced a distinct and innovative design to the VTOL UAV market. Aerovel applied this same thoughtful approach when selecting StreamCaster as the default communications solution. We are very proud to provide our technology to Aerovel, providing a competitive edge in the pursuit of the FTUAS program.”

Aerovel has teamed with AeroVironment — the Army’s biggest supplier of Group 1-sized UAS – to compete for FTUAS. The Army released a request for proposals on Sept. 28 for a Group 2 or Group 3 UAS, seeking multiple suppliers to supply three complete systems that can perform a 96-hr. continuous surveillance orbit. Afterwards, the Army plans to select multiple aircraft to perform a two-year series of demonstrations. The data collected during that phase will inform requirements for a fleet acquisition program.