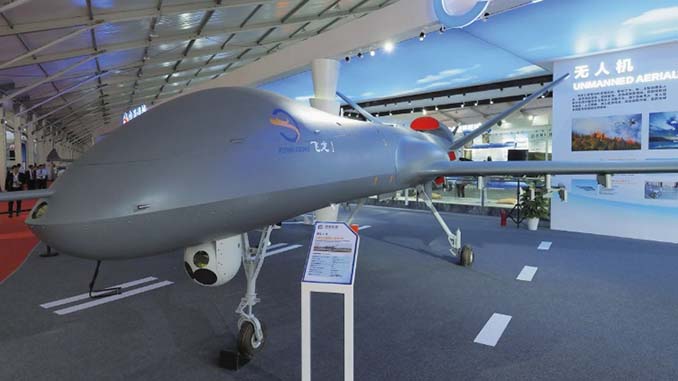 The prototype FL-1 – which was first unveiled at the Airshow China 2018 exhibition in Zhuhai and called the ‘Large Payload Long Endurance Universal Unmanned Transportation Platform’ – was launched from Pucheng Neifu Airport near Xi’an following 18 months of research and development (R&D) work by ZT Guide’s Zhong Tian Fei Long subsidiary, the company said in its statement.

According to official specifications, the FL-1 has a maximum take-off weight (MTOW) of 3,200 kg with a payload capacity of 1,400 kg inclusive of fuel. Two hardpoints can be mounted under each wing, with each hardpoint capable of carrying up to 250 kg of stores.

The FL-1 bears a strong physical resemblance to the 3,300 kg-class Cai Hong-5 (Rainbow-5 or CH-5) MALE UAVs manufactured by the China Aerospace Science and Technology Corporation (CASC). It has an aerodynamically shaped fuselage that measures about 10 m long and features a bulged nose section and retractable tricycle undercarriage, mid-mounted wings that are approximately 20 m in span, and a V-shaped tail assembly incorporating a pair of fins and rudders.

Both air vehicles are also equipped with a ventral electro-optical/infrared (EO/IR) turret, although the FL-1 features pronounced wing root fairings, which offer some visual distinction from the CH-5.

The air vehicle is powered by a rear-mounted heavy fuel engine of an undisclosed type with a dorsal intake. This engine drives a three-bladed pusher propeller, which enables the vehicle to cruise at speeds of up to 240 km/h at altitudes of 16,404–19,685 ft and attain an operating ceiling of 26,246 ft.