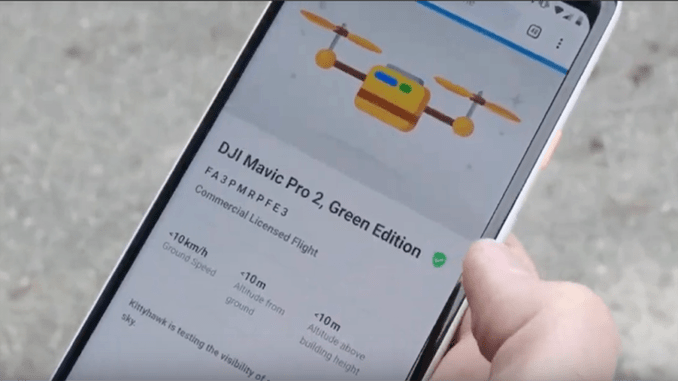 On December 17th, 2018 (the 115th anniversary of flight), Kittyhawk, Wing and AirMap all traveled to San Bruno, California, and demonstrated an implementation of an open source, network based, remote identification solution called InterUSS.

I wanted to talk a little bit about why Kittyhawk felt it was so important to participate in this demonstration and why open source solutions are so important for industry collaboration moving forward.

What exactly did Kittyhawk, Wing and AirMap demonstrate?

First, all three UAS got approvals to fly in controlled airspace via LAANC. Then, all three UAS Service Suppliers (USS) simultaneously flew multiple drones in controlled airspace, and as users of their own platforms, chose to share real time telemetry, as well as basic ownership and mission information of the drone — demonstrating that Remote ID is possible today. This means that anyone in the area could use an app to see who is flying and a rough account of what mission they’re looking to complete — delivery, inspection, or otherwise. This is a key building block for future UTM, BVLOS, and even Urban Air Mobility (UAM).

InterUSS is a project started by Wing to inform relevant third parties to identify drones operating near their current location. As a delivery service with a large amount of public exposure, Wing wanted to allow the public to see who was operating in their vicinity and what they were doing, and at the same time also protect the privacy of customers they were delivering to.

Since Kittyhawk powers some of the largest commercial operations in the country and the world, often in sensitive situations for large enterprises, Remote ID is top of mind for us as well as our customers. Too often we hear, “The first people our teams run into are law enforcement or concerned citizens, despite us having every credential and license to be operating there.”

InterUSS strongly aligns with Kittyhawk’s core values of transparency, inclusion, and interoperability. Walled gardens are not an approach that’s going to empower the full potential of drone operations in the United States. Demonstrating that multiple USS’ can share data in real time using an open source platform is paramount to informing future thinking and strategies for  Remote ID rules and regulations.

Why is an open-source approach critical for Remote ID?

Open source software is a critical tool to creating interoperability and enabling the transparency that prevents bad actors from exploiting power consolidation when a single entity is in charge of a piece of software.

I often hear the argument that open-source software is less secure than its proprietary counterparts because you’re giving adversaries the exact source code you’re using. This is a hold-over fallacy from the days when the only entities that could afford to collaborate and develop secure software were large private companies and governments.

Today, the democratizing force of the internet lets large distributed teams seamlessly create software that meets or exceeds the highest standards of security. In fact, the encryption you use to talk to your bank, the web server powering that website, and the databases storing that data are likely all powered by open source software. One of the most secure operating systems on the planet gives away every line of the source code: https://en.wikipedia.org/wiki/OpenBSD

The ability for multiple parties to scrutinize, collaborate, and work on solutions together without the overhead of office politics, bureaucracies and shipping schedules creates a level of security proprietary based software solutions would be hard pressed to meet.

Why is Remote ID a critical building block for the future?

Everyday we drive around with license plates on our cars, N numbers on our aircraft and IMEI numbers on our smartphones. Alone, they don’t do much to identify us but when given to the proper entities, they provide valuable accountability about who is operating and owning what car, aircraft, or device.

We think that Wing’s InterUSS solution strikes a pragmatic  balance between protecting the privacy of the operator and the concerns of the public.

Why does Kittyhawk favor network based Remote ID?

Ultimately, network based remote identification provides the most opportunity for use by the public and relevant stakeholders. It doesn’t require any special hardware, it allows multiple parties to both consume and populate the data, and with the power of technologies like LTE and the forthcoming 5G, it will be readily accessible to the largest amount of people with the smallest amount of overhead.

What does all of this really mean in the big picture of commercial drone operations?

Remote ID is the first and more important piece of the next generation UTM. It let’s stakeholders from all sides make decisions faster and with better information.

Kittyhawk remains dedicated to a safe and secure National Airspace. We think that transparency, inclusion, and collaboration amongst not only USS but all stakeholders in the commercial drone industry are paramount to enabling progress.

Kittyhawk vows to continue collaborating, innovating and creating solutions that empower the commercial drone industry. Questions? Just ask. We look forward to providing pragmatic and open solutions to remote ID and many other challenges in the years to come.

No Replies to "Kittyhawk, Wing and AirMap Collaborate to Demonstrate Remote Identification"