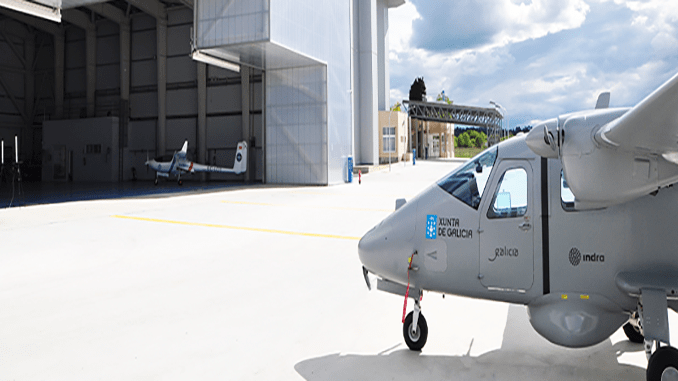 Indra, one of the leading global technology and consulting companies, and its partner Gaerum have just reached a key milestone in the development of the optionally manned Targus aircraft: the start of simulated flight tests to validate the design of the aircraft’s critical systems.

Specifically, they have begun studying the flight control, navigation and mission systems at the CIAR (Rozas’ Center for Research and Experimentation) in Castro de Rei (Lugo). All of them are components that play a fundamental role for the safety and operability of the aircraft.

Indra uses an advanced simulation methodology known as Software-In-the-Loop/ Hardware-In-the-Loop that makes aircraft systems “believe” that they are actually in the air.

Engineers test the electronic systems’ behavior in an environment set up to be 100% realistic. This is thanks to the fact that the data that feeds these components have been collected in real flights and perfectly replicate the situations they will face when they operate in a real environment.

In this way, the results of the numerical simulations previously performed in the laboratory by the Indra and Gaerum team are fine-tuned.

Design decisions are validated before moving on to the actual flight test phase, which reduces costs and minimizes risks associated with development and experimentation.

Once the correlation between the behavior of the system in the simulator and in the air is confirmed with a flight test, all these simulation hours will be regarded as real flight hours.

The deadlines for obtaining authorities’ flight certification are expedited in this way; a complex, demanding and totally unprecedented process for an aircraft with the characteristics of the Targus, which weighs 1.2 tons and has a wingspan of 11 meters.

The use of the simulation tool will shorten the time to market and reduce the price at which the product will be marketed, contributing to its success.

Once the tests with these components are completed, the next step will be to integrate them into the experimental aircraft for the development of the Targus.

The aircraft will undergo hundreds of hours of simulation to improve the models of the aircraft and all its sensors and actuators. Then, a battery of tests in the simulator will optimize the algorithms of the flight control and navigation system. Once these tests are passed, the flight experimentation stage will be undertaken.

Meanwhile, Indra is already working in parallel on the integration of the ground segment, a system whose role is to operate the aircraft from the ground and control all its mission equipment. These are the ones that collect and send data and images captured by the aircraft from overhead.

The Targus is an optionally manned aircraft developed by Indra as part of the Civil UAVs Initiative promoted by the Xunta de Galicia. The Targus is equipped with the most advanced surveillance technology to conduct missions related to maritime surveillance; to bring support to salvage and rescue missions, forest surveillance and fire-fighting, and to monitor land use and historical heritage sites, among many other possible applications.

About the Civil UAVs Initiative (CUI)

The CUI is one of the most ambitious initiatives in Europe for the development of civil drones. Its objective is to turn Galicia into a leader in the industry for this sector and promote the use of unmanned aircraft to improve the services that the State provides to the citizen.

Promoted by the Xunta de Galicia, the initiative is already expected to have funding of 157 million euros distributed in four major programs.  The first is centered on the creation and improvement of aeronautical infrastructures to ease the development of the drone industry in the region; the second is an R&D program with a €115 million investment, in which Indra and Babcok are the main industrial partners working on the development of new products, technologies and solutions; the third pillar is realized through ten pre-commercial tenders of solutions based on the use of UAVs that must be ready within two years – nine of them have already been awarded and are directed towards the improvement of rural environments and land management, maritime control and air traffic – and the last one is the business acceleration and incubation program that the Aeronautics Business Factory has recently launched and which seeks to attract and support company and startup projects from anywhere in the world.

Indra (www.indracompany.com) is one of the leading global technology and consulting companies and the technological partner for core business operations of its customers world-wide. It is a world-leader in providing proprietary solutions in specific segments in Transport and Defense markets, and a leading firm in Digital Transformation Consultancy and Information Technologies in Spain and Latin America through its affiliate Minsait Its business model is based on a comprehensive range of proprietary products, with a high-value focus and with a high innovation component. In the 2017 financial year, Indra achieved revenue of €3.011 billion, with 40,000 employees, a local presence in 46 countries and business operations in over 140 countries.