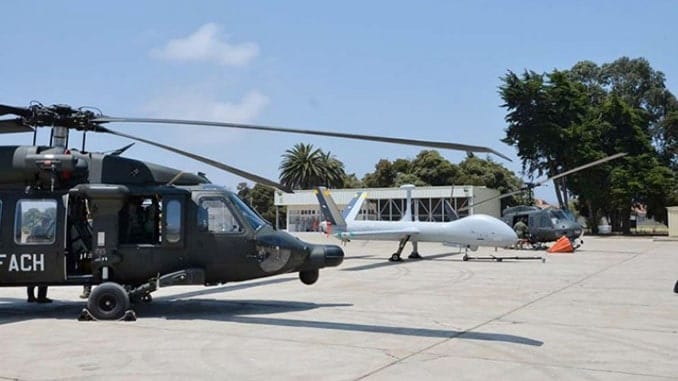 Chile has showcased the Elbit Systems Hermes 900 medium-altitude long-endurance (MALE) unmanned aerial vehicle (UAV) that it acquired from Israel in 2011 for the first time.

A single Hermes 900 MALE UAV was shown on static display at Quintero Air Base in the Valparaíso region of the South American country in early January, as the Chilean Air Force (Fuerza Aérea de Chile: FACh) highlighted the roles of several of its aircraft in fighting recent wildfires.

In May 2011 Chile became the first export customer for the Hermes 900 when it ordered three on an unknown delivery timetable. These were confirmed operational during 2014 by the FACh in reconnaissance and surveillance support roles over land and coastal areas.

According to local sources, Chile hopes to ultimately procure between six and nine Hermes 900s, depending on upcoming budget priorities, to equip reconnaissance platoons operating in support of the mechanized infantry components of reinforced brigades.

No Replies to "Chilean Hermes 900 Breaks Cover During Firefighting Operations"