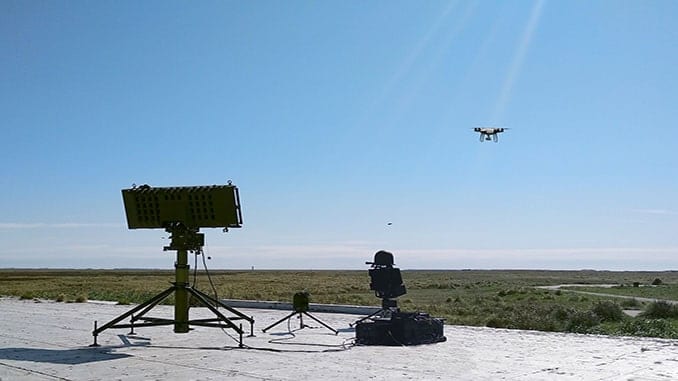 The Drone Guard Counter-Drone System, produced by ELTA Systems, a division and subsidiary of Israel Aerospace
Industries (IAI), was offered to the Gatwick Airport Authorities on Friday for immediate placement in the airport. The
proposed system, which already arrived in the UK, can detect and intercept drones using low level jamming and take-
over techniques. Already successfully proven in foiling several drone incursions into closed airspace during the recent
G20 summit in Argentina, ELTA’s Drone Guard is globally the most sold anti-drone system for military, homeland
security and civilian applications.

Gatwick airport was plunged into chaos on Wednesday night when drones spotted hovering near the runway forced
hundreds of flights to be cancelled. Airlines scrambled to board passengers while the airport was reopened on Friday,
but it was closed again on Friday afternoon when the drones reappeared, delaying and stranding thousands of
passengers, and creating delays which rippled throughout the weekend.

The system can handle threats from very short (2 KM) to long (20 KM) distances. Once a hostile drone presence is
detected, the radar directs the EO system to visually identify it. After the immediate detection and classification, targets
are mitigated by using different counter-measures. The system can effectively jam and disrupt the drone’s control
channel and navigation, by supporting a variety of communication protocols that can ‘fend off’ a single drone (or even a
swarm of drones) from the guarded premises or bring it down safely using ‘takeover’ methods.

Yoav Tourgeman, IAI VP and CEO of ELTA, said, “As we witnessed last week, the drone threat for civilian aviation
is real and imminent. It can span from delays costing the aviation industry multi-million dollars, up to a mid-air collision
which may tragically result in fatalities. Due to this emergency situation ELTA has stepped up and offered immediate
assistance with our system, in order to preserve the safety and routine of the travelers worldwide. ”