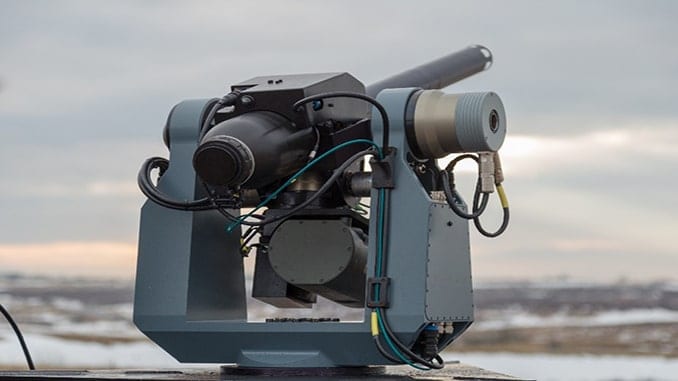 During the event, the operator easily targeted the UAS using the onboard SmartScope.  Once initiated, SkyWall neutralized the threat by launching a non-explosive, air powered projectile timed to deploy in front of the target and entangle it in its net.  The SkyWall launcher can be utilized with a range of projectiles which includes the SP40 round with net and parachute option which lowers the captured drone to the ground under a parachute, or the SP10 net-only round that has a larger net for increased effectiveness against fast moving drones at greater ranges. The SkyWall product line currently consists of two key devises. The SkyWall 300, a stand-alone or mountable turret unit that can be networked with multiple devices providing larger area protection, and the man-portable SkyWall 100 handheld system, which was first successfully demonstrated at the JIDO Hard Kill Challenge in 2017.  The SkyWall 300 will soon be fitted with an auto-reload system to provide increased capability for multi-threat scenarios.  Increased range and the ability to capture extremely fast-moving targets is also being addressed.

For more information about how SkyWall technology can help you complete your counter-UAS mission, please contact:  Rick Sondag at rsondag@liteye.com

All of our cutting-edge solutions feature revolutionary designs in optics, electronics, ergonomics, and form factors that enable a broad range of military and commercial applications.Need something beyond our current product line? Our research development team delivers sophisticated custom packages for some of the world’s largest companies and government agencies. With offices in the UK and sales affiliates worldwide, Liteye truly is moving “Beyond Human Vision” .

SkyWall offers a cost effective, proportionate and physical response to the drone threat, allowing the operator to physically capture and bring down a drone to a controlled landing under parachute. Using a combination of an air-powered launcher and an intelligent projectile, the concept embodies a simple principle: catch the target drone in a net. SkyWall has several built-in safety features to allow its use within a populated environment. The SkyWall product range offers drone security in portable and temporary or permanent installations. SkyWall100 is a handheld capture system that is operational around the world. SkyWall300 is an automatic mounted system that has been developed using Antmicro’s world leading Edge AI capabilities to allow fully autonomous UAS capture.