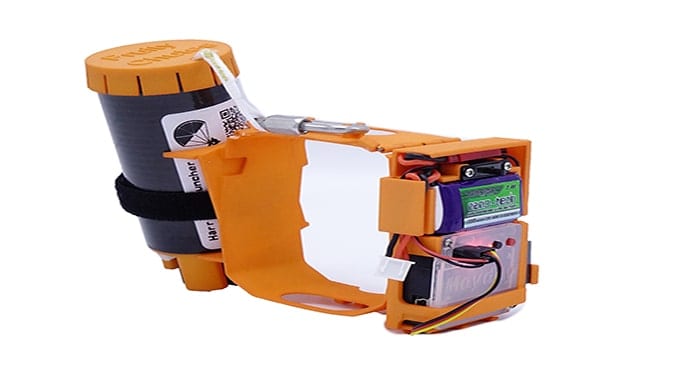 The Fruity Chutes Mavic 2 Automatic Emergency Drone Parachute is lightweight, easy to use, and reliable. Designed with ease of use in mind, you can pack and load the parachute yourself; you do not need to send it back to the manufacturer after use. The parachute system can be used many times. A small rigger jig is included to make folding and packing the parachute easy.

The Mavic 2 parachute uses the same technology as the Mavic Pro parachute. To launch the parachute, the bundle provides the Harrier 40mm parachute launcher. The Harrier features a high-energy compression spring that ejects the parachute out and away from the Mavic 2 quickly. The launcher has no regulatory or transportation limitations so you can take your Mavic 2 with your Fruity Chutes parachute system anywhere you want.

The centerpiece of the parachute system is the Fruity Chutes Iris Ultra Light parachute weighing just 0.96oz (27.7g). The parachute can easily work at heavier load weights of 2.4Kg or more. The Mavic 2 bundle includes a high tech integrated nylon printed mount that wraps snug around the center of the copter. No screws are needed!  The mount holds the Harrier 40mm launcher on one side, and the automatic trigger system (ATS), battery and optional manual rescue radio receiver on the other side. It provides good clearance between the prop tips and the parachute launcher components.

The parachute system is entirely self-contained, and not reliant on the Mavic 2 power so it works even if the copter’s battery has a complete failure. The automatic trigger system (ATS) can detect if the drone suddenly falls, rolls, or flips. Detection of a fall typically takes just 0.75 seconds, or about 15 feet of free fall. By the time the pilot notices a problem, the parachute will already be ejected.

To learn more about Fruity Chutes visit our website at fruitychutes.com.